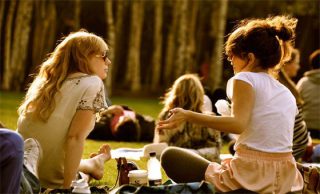 As a feminist, I believe that it’s more important than ever to support sex workers’ rights, while also being wary of the fact that I’m not sure if it’s oppressive or not and what I’m trying to say is it’s good and bad and certainly a problem disguised as a solution.

The fact that “slut-shaming” and sexism is so ingrained in our culture that we don’t even recognize our own bias in how we perceive female bodies in the heterosexist pornography that pervades in our culture, but we can’t even change the conversation around the fact that those girls are barely 18 which I both question and don’t question at all because human agency is complicated but also very difficult.

So what can we do? Simple. It’s time for women everywhere to come together to put a stop to and encourage open mindedness about the very cut-and-dry, complicated issue of sex work. And that’s not negotiable. We are women, and at the end of the day, a united front is what will carry us through the next period of change and stagnation, and that’s my final word on the matter.

I Want a Prison Girlfriend, Except Actually a Guy and Not a Criminal I Thought My Shoeshine Guy Was Proposing, and I Said Yes