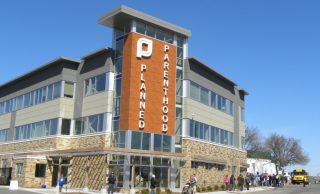 I was young and scared when I entered that inconspicuous gray lobby all those years ago. At only 20 years old, I didn’t feel like I had anyone else to turn to. My dad wouldn’t understand. My mom would blame me for letting it happen. And the guy I slept with was a total flake. There’s no way I could tell him about the life growing inside me. Plus, my health insurance wasn’t valid outside my home state. I saw a flyer for Planned Parenthood on campus, but I shoved it in my backpack, hoping the problem would go away on its own. But I could feel it getting bigger every day. Soon my clothes started fitting differently (because of all the yeast). At seven weeks, I panicked and made an appointment.

I know this will be hard for some of my relatives to hear, but when I was a sophomore in college, I let Planned Parenthood kill my yeast infection.

You’re probably wondering, “How could she let those monsters administer a very effective prescription ointment for just a $15 copay which would have been virtually unavailable to low-income women anywhere else?” To you I say: This is all a part of their money-grubbing, yeast killing plan. I was tricked into a hasty decision by those cold, liberal, godless doctors who just wanted to profit off my very low-cost at-home medical procedure.

Planned Parenthood took the Candida from my body that day, and I’ll never get it back.

Things felt off as soon as I arrived. The waiting room was plain but tidy, and the employees were friendly—almost too friendly. They said that it happened to lots of women, that taking care of it would be easy, and that I’d be able to better concentrate on school if I didn’t have an angry yeast infection storming its way through my loins.

Every staff member I talked to told me I was doing the right thing, and even seemed confused by my hesitation. It all sounded so obvious out of their liberal, yeastless mouths. My church taught me that all life is sacred, even the most vulnerable life of all—fungus. I was torn between two sides that seemed so resolute on whether or not I should carry my infection to term and let it overtake my entire body.

I asked my doctor if she’d ever had a yeast infection herself, and she laughed and said she’d had about a dozen or so, and one “stubborn little bugger” that didn’t respond to the first termination. I was horrified—she was a doctor! But it was too late. After just an hour of taking my medical history, administering a pelvic exam, and writing me a prescription, the staff at Planned Parenthood hurriedly ended my yeast infection.

I live with that decision every day of my life.

I thought I’d have more opportunities to have a yeast infection later in life, when I was older and ready for it. I pictured my post-college, gainfully employed, older self sitting around in wet bathing suits for hours on end, having hard sex with cheap flavored condoms, drinking tons of beer while wearing a too-tight thong… but no. Because of the treatment and information I received that day at Planned Parenthood, I have not had a yeast infection since. I missed my chance at fostering the lives of millions of Candida yeasts in my womb.

I’m heartbroken. I’ll never furtively scratch my crotch in line at the bank. My roommate will never sniff the air curiously and ask me if I’ve been baking bread. Sure, I could get a yeast infection through other methods, like in my mouth or throat, but that infection I terminated will still be gone forever. All these possibilities shatter before me like so much broken glass. The “someday” I’d counted on will never be.

How I wish I could go back in time and tell that scared little girl, “You don’t have to do this. There are other options. You can keep that raging vaginal fungal overgrowth.” I wish it so hard every day. But wishes can’t time travel, and neither can yeast. That’s why I’m so passionate about defunding Planned Parenthood.

I know there are other confused young women out there, just waiting to be preyed upon by Planned Parenthood’s money-grubbing, infection-treating scheme. I want those girls to know that they have every right to stay itchy for as long as they want. I’m taking that message from church basements to college campuses—all the way to Capitol Hill.