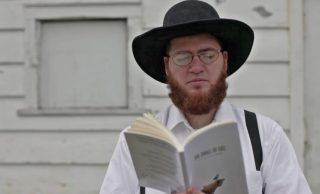 I met Jacob in the middle of a field on a dusty summer day. I was in line at a small farmers’ market when he bumped into me, and we locked eyes. “Pardon,” he said in an accent I couldn’t place, his straw hat quivering in the wind, “I am just getting some water for my dog.” He motioned to a beautiful glazed clay jug in his hand. How could I be so lucky, I thought, to find a man with beautiful eyes, wheat-colored hair and perfectly distressed overalls, who preferred ceramic over plastic? The hipster boyfriend of my dreams.

I soon found that we saw eye-to-eye on plenty of other core values; for example, a love of cheese, and a deep appreciation for a comfortable cotton shirt. We spent Saturday afternoons at his lettuce stand, cloud-gazing and making puppets out of rotten heads of endive. He told me about how he built his own furniture, and when I offered to advertise the name of his stand on my boobs, he asked me to “please not.” What a gentleman!

But I should have known there was something awry.

Our first fight happened when I accused him of having another girlfriend. “No, Courtney,” he told me. “As I keep telling you, I am betrothed to another,” which referenced a running joke he had with me.

I also didn’t believe him that he “just didn’t” have a cellphone, which was the first of many red flags that I would have noticed, had I not been so blinded by adoration. Beyond the fact that he lived in a cabin outside of Philadelphia, I didn’t know any details of his home life. “You know, Jacob,” I finally announced one day, “I would follow you to the ends of the earth and back, but if we can’t establish an open dialogue, then I think you’re going to lose me.” He shrugged. Just another detached hipster, I thought.

So, naturally, I followed his buggy home that night. On a sprawling estate, I saw a slew of young women running out to greet him, all wearing what looked like last season’s Anthropologie. “So THIS is your quaint country home?!” I demanded, charging out of my car. “Some sort of hipster sex commune?” “Courtney!” he returned. “What are you doing here? These are my sisters. Most of them are named Ann.”

And that was when I looked around and started to put the pieces together: That barn in the distance. The lack of wifi. The neck beards. Jacob, I realized, was Amish.

I was able to get immediately back into my car and drive, crying all the way home. I’m almost ready to start dating again (only men with cellphones and belts this time), but I’ll never forget Jacob. The charm of his dentistry-free smile, the way his arms looked under that button-down when he lifted a bag of lettuce. But I know in my heart he’s out there right now, bundling some pretty cousin into a courtship sack and thinking of me.

Babe! Call Me Babe, Babe! Is It Too Late to Ask Who Lorde Is?