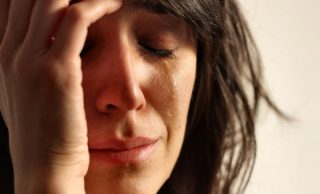 There I was, walking down the street on my way to brunch one Sunday, deciding just how to tell my friends that Todd and I were ready to take it to the next level, when something happened that shook me to my core.

It was bound to happen some time—being that I’m a friendly gal from, well, not here. I did the one thing a people person like myself fears most: I was walking along, minding my business when I saw a girl waving at me across the street, so naturally I waved back. Then I realized she was actually waving to someone else. Someone who was not me.

I should’ve known something was wrong when someone waved to me before I waved to them. I’m always the waver, never the wavee. She looked so unfamiliar, after all. Everything felt off and I was flooded by a wave of nausea. Then the wave of nausea reminded me of the wave of the stranger and I felt even more waves of embarrassment. It was a negative feedback loop of waves.

My mind began racing and I could feel the piercing stare of people’s eyes waving at me. It felt like their faces swirled around mine in a tornado of judgment, waving at my shame.

Things only worsened when I attempted to fix what had happened.

I walked right up to the girl who was now laughing hysterically with her friend, the one the original wave was directed toward. I began to state my case, over-justifying myself to them and a group of wide-eyed passerby, who had formed a circle around where they were sitting.

“That wave wasn’t intended for you, just so you know,” I said loudly, so everyone in all of midtown who had possibly seen me return a wave intended for another human, could hear. “I was waving to my friend up there on top of the building over there!” I added, foolishly pointing to the Empire State Building.

“Okay, no worries,” she said as I slunked my head down in shame and began walking toward my now inevitable brunch binge, hoping to fix all of the sadness I was feeling with the sweet goodness of waffle-filled crêpes.

When I arrived at brunch, I spotted my friends and they waved me over (yes, this wave was intended for me). They immediately knew something was up and patted my back as I recounted the tale, tears streaming down my face.

“That could happen to anyone,” said Jill. “Has it happened to any of you guys?” I asked hopefully. But I already knew the answer. It hadn’t.

I live on a hillside now, sequestered from modern society, out where no living thing possesses the ability to wave. Still, I’ll never forget the sting of that moment, forever etched inside of my brain.

I don’t wave back anymore, and probably never will. People say I’m guarded now, but most people will never truly understand what it’s like to feel vulnerable. I hope I never have to feel that feeling again.

Oh Thank Christ, Rachel Finally Read That Book About Tidying Up My Boyfriend’s A Squirter