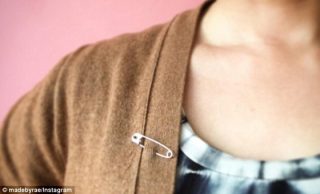 My Monday started out great. I woke up and put on my safety pin, feeling proud to project a teeny tiny symbol of allyship to all the people of color, LGBTQ folk, and women who, if they squinted really hard, could see that I’m here for them. It was only when I got on the subway that the unthinkable happened: someone actually noticed my safety pin.

There I was, minding my own business as two young white men sat on either side of an older Latina woman and had a loud conversation about how she needs to go back to her own country.

I didn’t want to intervene without knowing all the facts. They could have all been friends sharing an inside joke. Or it could have been a piece of performance art? I had promised on Facebook to use my privilege to support those threatened by a Trump presidency, but I hadn’t promised to be a mind-reader!

It was when they started shouting “Trump, Trump, Trump” that the woman glanced in panic around the train car and apparently saw my safety pin. I was like, what? You can actually see that thing? At that moment, everything was clear to me; the $240 sterling-silver unity broach I’d bought on Etsy two days earlier was not just a symbol of my theoretical support, it was an actual beacon of hope for those in need. Why didn’t anybody tell me I would maybe have to do something?

When the woman who was still being yelled at murmured “please” while looking directly at me, I was wondering why she picked me out of the crowd. Then I realized, “Oh my god, the safety pin.” How did she even see it when it was so small, so obscured by the handles of my NPR tote? So I screwed up my courage and said “come on, guys” very quietly to the men. They called me a bitch, but they stood up and got off at the next stop. Talk about tense! I had no idea that something like this could happen to me.

And when I finally got to work, lo and behold, my boss said, “Why are you wearing that pin?” and asked me if I supported “…all that Black Lives Matter bullshit.” How was I supposed to know that this tiny marker for social justice would require me to have a conversation about social justice? Just ask any of my friends: I hate confrontation! Since I was feeling really tired that day and just didn’t want to deal, I threw my gem-encrusted symbol of safety in my desk drawer to save for another day when I was feeling more up to it.

Do I have any regrets? A little bit. But at the end of the day, I had now idea how much this symbolic gesture of progressive solidarity would actually require me to do something about it.

4 Foreboding Omens Who Are Trying to Mansplain My Death to Me I’m Willing to Hear the Other Side, As Long As I Get to Do All the Talking