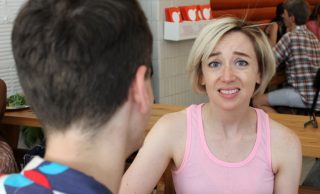 I try to be open to meeting new people. I’ve gotten used to small talk and thought I was relatively prepared for the kind of questions that are involved in meeting a new person. That is until recently, when a stranger asked me something I was completely unprepared for, something that shook me to my core.

That’s right, he asked me what kind of music I listen to…

It started out like any normal interaction. I was talking to a friend of a friend at a party and everything was going well. We talked about where we worked, what we studied in college, the usual. Then there was a brief silence. I could tell we had nothing left to talk about.

The conversation moved to a concert he recently attended. I could feel myself sweating and my mouth go dry. Then, the dreaded question came: So, what kind of music are you into? Suddenly it was like all knowledge of my musical tastes had been wiped from my brain as he asked me something I had prayed to never be asked.

I tried not to show any distress. I listen to music every day, right? Surely I should have been able to name a handful of bands, a genre even.

Instead, I thought I could placate him with something vague like, “Oh, you know. I listen to all kinds of stuff.” This only piqued his interest more. “Oh really?” he asked me, his eyes burrowing through me like well-cultured lasers. “Like what?”

I tried to imagine the playlists that were currently sitting in my Spotify library. Nothing. Does he even realize that it’s 2018 and everybody listens to basically everything?!

Concerts! I had been to a concert recently. I decided to run with that. “I went to a Kenny Chesney concert with my mom last week,” I told him. I immediately wanted to die.

“Oh, um, not really,” I responded. A long silence followed.

Mercifully, he changed the topic of conversation and I felt the weight of the world leave my shoulders, but I couldn’t shake the conversation for the rest of the night. I planned to go home early and furiously write out an answer that would save me from having to think about this question ever again.

Until he looked at me and asked, “So, what kind of movies do you like?”

I Lived It: I Found Out How Much Mattresses Cost Motherhood Is Hard, But It’s Also Filled with Neverending Judgment