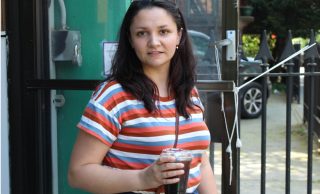 Beverages: We’d be thirsty as all hell without them, and yet they can sometimes turn into our enemies when we least expect it. I learned this cruel fact the hard way when the ice at the bottom of my drink absolutely slammed my face with all the ruthless precision of a premeditated murder.

You just never think it’s going to happen to you until it does.

I was having a gorgeous spring day, sipping a cold brew from a cup with no straw and no lid because I love Mother Earth. Everything was going fine until I neared the end of my refreshment. All of the ice cubes lay upon the bottom of the cup, but there were still some droplets of cold brew down there.

I may be a liar, an adult guitar class cheater, and a reckless Hyundai Sonata driver, but I am not someone who’s just going to throw away any part of a $5 iced coffee.

Living in the blissful ignorance of the unharmed, I tilted the cup upward. My naïve assumption was that the ice would fall against the side of the vessel and gradually make its way up to my lips.

Reader, I had another thing coming.

I should have known all was not well. God fucking damn it; I could have prevented this. But no. That’s victim blaming and I know better. But as I said, there were signs of imminent disaster. The ice did not fall against the side. Instead, it stayed spread out on the very bottom until I angled the cup at just beyond 90 degrees from the face.

That’s when all hell broke loose. It was the blink of an eye and an eternity of terror. The cubes came violently cascading down like an avalanche sent by an angry god to obliterate a hot and smart person’s face. They hit me right in the nose: the old smeller.

This attack was startling, shameful, and wildly destructive. Mostly because this took place during a job interview and I did not react well. Obscenities were screamed, security was called — we all know how this story ends.

The everyday consequences of this snafu may not always be so dire, but it always takes am emotional toll. So be careful out there, and maybe stick to hot drinks that will just burn your face instead.

Why I’m Rejecting Diet Culture and Consuming as Many Microplastics as I Want DUDE CORNER: The Day Airlines Ended Their Mask Mandates Was Better Than the Birth of My Son