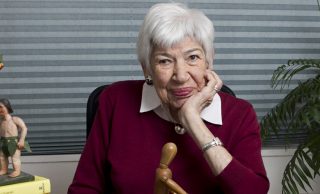 My therapy session this week started just like any old therapy session: I walked in five minutes late, dropped my stuff, and started recounting every minute of my life since the week before. I was mid-rant about my high school ex-boyfriend in a therapy session, just business as usual, when the genuinely unthinkable happened: My therapist said something to me.

I thought this was a one-way street, with that street being occupied with me steamrolling her with my problems for 45 minutes once a week. But I was so, so wrong.

Now, don’t get me wrong; I am not a stranger to therapy. I’ve been to multiple therapists, and I know that every therapist has their own style – their own style of listening to me endlessly and unproductively ramble on and on. I had never once encountered a person who would be so insensitive as to “speak up” in the middle of a session.

I didn’t know what to do. I was in such shock from hearing her voice for the first time that I didn’t even hear what she had said.

“I was wondering if you could tell me a little bit about how you felt during that time,” she replied, relentlessly forcing her control over the session.

I was flabbergasted. She had a voice, and the gall to have curiosity about something. Soon, I began to grapple with the fact that she probably had other questions about my life as well, and maybe even a life outside of our therapeutic relationship. Maybe she even had friends and family. But why should I have to know any of that? It was all too much.

I couldn’t believe it. I had been seeing this woman for months now, and I had thought this entire time that the point of therapy was to tell my side of the story and to never, ever consider that there could be another side. Who did she think she was, asking me to think about “How I felt,” and “How would I feel if the situation was reversed?”

Soon though, I was able to take some deep breaths and ground myself enough to answer her. And then she said another thing. And another thing. And then I said something. Kind of like a conversation. It felt good, almost as if I was receiving feedback and coping with the past in a healthy and safe environment. I decided it was fine if therapy turned into a two-way street. Or maybe more preferably a one-way street with the occasional conversion into a two-way street. We’ll see.