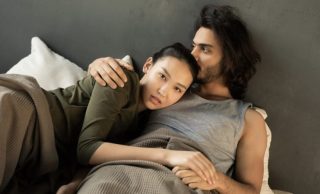 I haven’t been able to look at him the same way since.

When my boyfriend Raymond and I started dating, we couldn’t get enough of each other. It was hard to spend even a moment apart! We were inseparable, and this was partly because of how good and how long he could scratch my back.

However, I didn’t know that after a few months of getting comfortable, this kind of gesture would be quickly cut short, leaving me out in the cold forever.

Earlier today while we were watching Forgetting Sarah Marshall, Raymond started absent-mindedly scratching my back as usual, but just a few short scenes later, he suddenly dropped his hand from my back and held my hand instead.

What could cause someone to change so much in so little time?

Of course, I asked him what was wrong since the only thing that would’ve logically made sense is if he got an arm cramp or had a flashback to a super traumatic memory or something. But for some reason, Raymond was confused about why I was questioning him in the first place.

“Nothing’s wrong. Are you okay?” he asked, despite obviously knowing what the issue at hand was.

My back trembled from the lack of scratching.

It’s crazy how someone you thought you could count on can just turn around and stab you in the back, or in Raymond’s case, ignore your back entirely.

It’s not like I’m asking for much – I just want him to scratch my back until we both eventually die. What’s so wrong about that?

Now I’m not sure if I can keep trying to make this relationship work. After all, people grow and change when they’re in relationships, and if Raymond is someone who doesn’t want to scratch my back anymore, then who am I to keep this tired charade going?

Oh, wait – he started scratching my back again. Nevermind!

Why I Don’t Buy Into Trends Because I Don’t Know What They Are Right Now DUDE CORNER: I Understand Women Because I Have Three Sisters I Hate