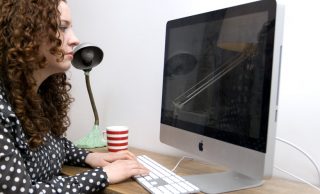 The author of this article would like to begin by stating that she did not even want to address this issue. In fact, she is quite certain that this topic is beneath her, and given her druthers, she would not even acknowledge it. That being said, rumors are circulating that said author is a “defensive person” who  “does not respond well to criticism” and “abuses air quotes to such an extent that people are concerned that she might have some kind of exotic strain of finger Tourettes.”

Under normal circumstances, the author would be unperturbed by these allegations. She laugh them off while nursing baby birds back to health and donating to other peoples’ Kickstarters. This week, however, the author switched to the generic brand of birth control and is dealing with some serious hormonal imbalances. So she will deign to defend herself against these baseless and potentially life-ruining accusations.

To start, the author would like the record to show that she is not a defensive person, not by a long shot. In middle school, the author played soccer and she was so not defensive, she was not even considered for the role of “goalie.” The author would also like to note that she does not drive defensively, as evidenced by her multitudes of speeding tickets.

Next, the author would like to know when “being defensive” became such a bad thing? Evolutionarily speaking, if this author’s ancestors had not been defensive creatures, they would have been mauled by cheetahs or persecuted for their religious beliefs. And then the author would not be here to pen this thought provoking article (which she will defend with her dying breath).

Not one to point fingers, but the author would like to remind her readers that the best defense is a good offense. And perhaps the people spreading these vicious lies are actually the defensive ones. Perhaps they are trying to distract from their own insecurities by attacking the poor author, who hates confrontation so much that she would never stand up for herself, not in a million years. Except that she is also not a doormat and she is not going to take this abuse lying down.

Finally, the author apologizes for bringing World War II into this, but there’s a very touching quote from that time. The author forgets the exact verbiage,  but the gist is that if the author does not stick up for herself, who will? Her friends? Her family? The government? Not likely. So the author apologizes that people think she is being defensive, but really, it’s only because society made her this way.

In Defense of Stirring Up Controversy Unwanted Opinion: I Don’t NEED Nail Polish