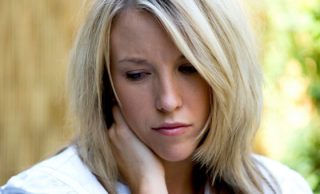 You know it, I know it, and from the look he just gave our table, the waiter sure as hell knows it: I don’t have any cash on me.

It’s not my fault. It’s the fault of every “service” establishment that puts up the most oppressive sign a woman will see in her life: “Cash Only”. I thought we lived in a country that supports diversity in all its forms of payment. It’s not the nineties anymore; people don’t just have loose money to flap around. Plus, the ATM is all the way across the street. I’d boycott restaurants, but then where would I get food?

I’ve been forced to “hit the ATM” from time to time. Whenever I get cash, I spend it immediately, which makes it even harder to pay things like my lease payment or my staggering student loan debt. I lose total control and buy rounds of shots, bagels for the office, and put money in tip jars. Two years ago I hit rock bottom at a flea market, where I paid $3.50 in ATM fees – twice. I can’t just keep doing that like it makes sense.

I can only afford to keep actual things of value in my wallet: my debit card, my dad’s Amex, and my Discover card that has a great rewards system. Or so I’m told. Between Team Plastic and my salad punch cards, I simply have no room for cash. I’m nine salads away from a free side of anchovy. Do you realize how much I had to sacrifice for that?

It used to be charming to not carry cash. I could borrow a crisp $20 bill from a gentleman friend and get through my whole day. It was a way to let men know you weren’t threatening financially, and that you were planning on sleeping with them later. But inflation has pushed this ritual out the window. You try getting two cocktails for $20. And don’t even get me started on the cost of hamburgers.

Cash-only restaurants are really hurting themselves, but more importantly they are hurting me. Sure, the waiters get tips in cash. And they don’t have to pay credit card fees. But when I walk in the door and order a three-course meal, they’re getting nothing!

Anyway, they’re probably underreporting their income to the government. It’s a tax thing. My dad can explain it way better. In the meantime, I am starving.