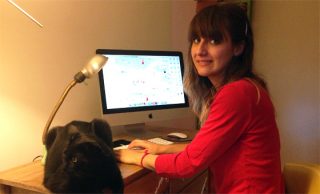 Last week on a train to New York, a train conductor “accidentally” shoved me while we were making our way between cars, causing me to nearly fall off the train. Most people would think, “what a horrible surprise.” Though it was horrible, it was certainly no surprise. He did what many people want to do when they see an ugly woman: get me out of their sight as fast as possible, by whatever means necessary.

As a female, being unattractive has affected my daily life in so many ways it’s impossible to describe, but I sit here writing this, bearing my ugly soul in hopes that someday things might change for us, the aesthetically challenged. The worst came of my grotesque nature this past fall, when I was fired from my job for being an abhorrent distraction to my boss and coworkers.

Ever since I can remember, my friends (the few I can barely keep) have constantly asked me to be their “wingman.” It’s because they think I will make them look more desirable, which is the only reason they keep me around.

When I’m out at a restaurant, at least one person is bound to gag or vomit over the course of the meal. I just nod with a solemn understanding that even opening my mouth to chew my food is a vile, sickening show of horror.

I’ve been asked to be the maid of honor for 13 weddings last year alone, simply because my own disgusting face makes the bride’s mediocre face seems more stunning.

My boss’s lawyers claimed that my “incompetence” and “negative attitude” led to my termination, but I know that was just a nice way of telling me that my appearance is proof that God made a grave mistake in creating me. I am certain my mere presence lowered my boss’s sex drive, causing irreparable damage to his marriage. His wife also testified that my face caused her night terrors.

I hope one day my female friends, and the world, will finally stop judging me by what I look like, and instead accept me for who I am. Until then, I’m forced to live out my days as a modern-day Quasimodo, ringing the lonesome church bells in solitude until my looks stop causing such immense suffering around me.

Fat First Names and How to Fix Them! Self-Medicating with Selfies