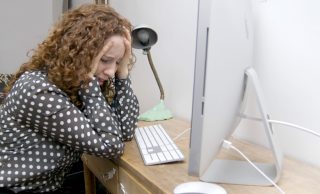 It’s been an extremely upsetting day. Why is my life literally in ruins? Because I Googled who I thought was my soon-to-be celebrity husband only to find out he’s already married. To someone else!

One month ago, when my world was still whole, I started binge-watching The Walking Dead and promptly fell for Rick Grimes, played by Andrew Lincoln. My love for his beautiful face and strong morals grew so strong, so fast, I knew there was no way the Universe wouldn’t bring us together. I watched three blissful seasons of this creepy gore-fest because of Andrew. Until today, when I discovered what he had been hiding from me for years.

I had already noticed he was wearing a ring in a lot of photos, but I just thought “he’s a new-age man who likes jewelry! That’s what makes him so unique and sexy.” But it wasn’t until I actually read about him that I learned the truth. I should have known—how has reading ever helped anyone?

Maybe, I thought, I’ll read about why he wears that ring, surely a family heirloom that has nothing to do with reasons rings are typically worn on ring fingers. So, I’m squealing with delight over his Englishness, scrolling further and then I see it.

He’s been married since 2006. Apple Martin was the flower girl at his wedding.

I’ll never be able to look at Apple the same way ever again. Or zombies, for that matter.

He had a wedding. With a bridal party and a ceremony and vows. Because he is married.

How could he do this to me? I may just be a small-town hairdresser in Montana, and he may be a big star with a fancy accent, but I don’t even get a chance to love him the way I deserve?  The world is just as cruel and unfair as my mother always told me it was.

Well, he sure is a great actor, because his eyes were always saying that we were meant to be. And now I know, that that’s a lie. That Andrew Lincoln is a lie. I may never be able to trust a man again, but I hope I can point out the warning signs to other women just like me.

Pooping in the Shower is Just Something On-the-Go Women Do! The Girl I Babysat Is Now A Grown-up