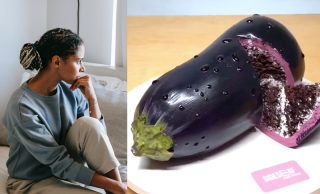 Dating is already difficult enough without getting catfished. I personally never thought that I would be in a situation where I’d meet someone who’s different from what they looked like in their pictures or had a totally different filling than normal blood and guts, but that was until I met Brian.

I thought I was talking to a nice guy online, but it turns out he was just a nice cake.

Brian and I first started talking when he liked my photo on Hinge. After chatting for a couple days, I found that there was something special about him. He just got me in a way that no other man I’ve talked to did. I suggested that we meet up at a park to have a picnic sometime soon, but he kept deflecting.

“Sorry, I don’t really like parks,” Brian told me in a message. “And I’m also really busy at work right now, but maybe we can go on a date after things cool down a bit.”

I didn’t think anything bad about it at first. After all, work gets busy! But after a month of texting, I started to get a little suspicious. We’d been talking for so long, and I really thought this could be the man of my dreams. Little did I know that he just appeared that way because of his hyper-realistic fondant.

After about a month and a half of rescheduling dates, he finally agreed to a video call, and I was thrilled! I got all dressed up for our little virtual date that night, and he joined the call, but he said his screen was frozen. I was so confused. Did he have bad internet connection? Was he cake? I definitely wasn’t asking that second question at the time.

Right when we were talking about how many kids we’d hypothetically want, I saw it: a giant knife came onto the screen above him. I watched in shock and horror as he was suddenly cut in half by the huge blade. At first I was scared that he was hurt, but I was heartbroken when I saw that he was, in fact, just cake the entire time. A voice from somewhere off the screen said, “Gotcha. This is cake.”

I can’t believe I almost fell in love with someone who had buttercream filling.

To this day, I’ll never forgive those chefs for what they did. I don’t know if I’ll ever recover from what I saw that day. To anyone reading this, let this be a cautionary tale. I found out the hard way that anything can be cake; even the man you fell head over heels for.

And I didn’t even get to try him!

I LIVED IT: I Had to Spend Some Money I Use Dating Apps, But Only to Find People to Burp Me When I Drink Milk Too Fast