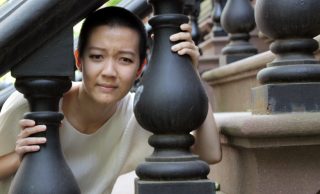 From a young age, we’re told to express ourselves, to be kind to ourselves, and to remember that we are our own harshest critics. But what if I told you that was all complete bullshit? Well it is, because a cashier at this hardware store just thought my regular clothes were a “Halloween costume”.

All I wanted was to buy some AA batteries and Swiffer wet pads. I even walked to my local hardware store instead of ordering them on Amazon because I naively thought at the time that we lived in a world where good things happen to good people. But not 30 seconds into ringing me up, the fellow being across the counter said to me, “I like your costume. Are you like an old timey detective or something?”

Okay. Where to begin with this attack?

Yes, I was wearing a herringbone vest because my cousin said sweater vests are cool right now but this is all the Goodwill by my apartment had, but I thought I was pulling it off. Can’t a lady wear a formal vest with a button down and some trousers? Old timey detective just feels like such a far and uncharitable leap.

And I was on my way to meet my boyfriend’s parents for the first time!

I used to believe in a more or less shared reality. I trusted in an irreducible truth and the possibility for real human connection in pursuit of it. But now, I think I might actually be out of my goddamn mind if what I saw as a put together outfit was read so confidently as a Halloween costume by a stranger that he didn’t even preface it with a question that would save us both embarrassment if he was off the mark.

He took one look at me and thought, “This person is wearing a Halloween costume.” On October 10th!

He could have thought I was going for a Diane Keaton menswear look, he could have just minded his business, but no – this man went straight to Sherlock Holmes, and I may never recover.

Anyway, the experience stripped me of my sense of self, my pride, and any ounce of confidence I had to begin with. But with that being said, and I did get ahead of it and told my boyfriend’s parents that I was going to a murder mystery party after dinner, to which they said, “Ohh.”

So, perhaps it was for the best.

Why I’m Preemptively Arranging 4 Funerals for Myself So My Friend Groups Don’t Mix I LIVED IT: I Recorded Myself Singing Just to Check