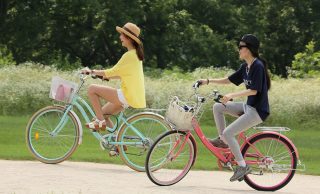 I’ve always loved riding a bike. When I was kid, it gave me the freedom to go where I pleased without a parent driving me, and now as an adult it’s a cheap and healthy alternative to public transportation. But this past year I also learned how dangerous riding a bicycle can be if you’re trying to be fun and free-spirited. You see, I almost died because I was riding my bike like an adorable lil’ bitch.

Usually I’m pretty serious when it comes to cycling around the city. I wear the proper attire: helmet, sneakers, bike shorts. But a few months back, I felt like I needed to look “cuter” on my bike so I could get a good pic for the Insta. I’d seen so many photos of perfect little twee women, legs akimbo, straw hat blowing in the wind, and I wanted that to be me! So I put on my cutest spring dress, wooden clogs, and a floppy sun hat, hopped on my bike, and made my boyfriend take a picture of me as I rolled down a hill with my legs sticking straight out. I had attached a wicker basket to the front of my bike, and had placed a bunch of wildflowers and a baguette in there. It was so fucking cute you wouldn’t believe.

I immediately rolled into a fence.

When I told the ER doctors I was “just trying to be a cute little bike bitch,” they told me I was lucky not to be a “dead little bike bitch.” Those were the exact words they used. They also said that if I’d been wearing a helmet, and not a floppy hat with a bow, that maybe I probably wouldn’t have cracked my head open and had bleeding on the brain. I also ruined my cute hat. Ughhhhhh.

Oh, also every medic who arrived at the scene saw my whole ass because I was wearing just a little white gauzy dress.

I really don’t want to get too into it, but the baguette ended up…in my butt? That was probably the worst part of the whole ordeal.

I guess there was a silver lining, though. The picture turned out super well. I got like 600 likes on Insta, especially when I posted it and was like, “This is how I almost died.”

Now that I’ve almost fully recovered from my near-fatal accident, I can firmly say that when it comes to riding a bike, being a cute lil’ bicycle bitch will only put your life in danger. You can be a safe, normal bitch and wear a helmet. Just don’t post that on Insta, because that’s just fucking stupid.

I Relate to Your Dating Struggles Because I Have A Husband – Did You Know I Have A Husband? Dressing up for Halloween is Your Right as an American but Not a Mandatory Civic Responsibility