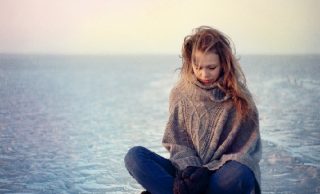 Growing up in a broken family, I never learned how to express myself, or whatever. Every time I had an opinion to voice, I got sort of beaten down by the stuff going on with my family: there was my father – a lawyer first, a father second, I guess you could say. Then there was my mother, a kind-as-could-be schoolteacher at work, but, um, something sort of worse at other times. My biggest escape was into my diary, where I could write my innermost personal thoughts without the risk of being like, judged or something like that. My diary became like my best friend, holding my secrets, and uh, comforting me when I needed, um, to feel less feeling-thoughts.

All this made getting into relationships not easy, because weird stuff would always happen during things that were important I think. My first boyfriend proved to be a test of my social … uh … I don’t know. Because there were your basic difficulties and things. Whenever we’d be go out together, my feelings (etc.) would just get, um, more. It got to a point where those three little words just came tumbling out of my mouth: “I whatever you.” I couldn’t say what I really felt but I figured he’d understand? But it turns out he, like, did not, because he ended our relationship thing right then and there. I was bad-sad-feeling for a while (I think). I don’t know. I wasn’t sure how to feel about it so that was like confusing and all and my parents could tell I was like weird, so they started acting all different and sort of crazy or whatever toward me and you know things got sort of hard and weird.

That’s when I started seeing a therapist – I needed to learn how to get my thoughts out clearly (I don’t know it’s not a huge deal). Things with her were maybe going okay: we did some word association thingies, some stuff with breathing? And mindful meditation type activities, and whatever. One day she asked, “How do you see yourself?” and I replied, “Um, what?” I realized then that healing would be a bunch of steps that all related to each other but that, really, one step would be higher than the next (like a staircase – she tells me “using similes” is helpful). Talking was just like, the initial way to kinda get into my brain. Because only through “illuminating the darkness” could I make my way down the road to, um, you know, feeling less whatever or something, I guess.

So slowly she helped me discover that I’d just like never figured out this whole expression thing and like I’m sorta trying to put words together that like show what’s on my insides and brain but it’s hard because like I said I just never really did this whole communicating of urges or whatever you want to call it, so…yeah. You know. It’s just hard or whatever.