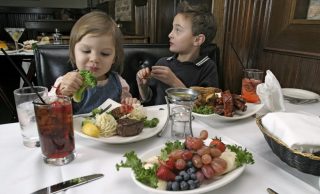 When my husband Richard and I were ready to start a family, we knew it was important for our kids to feel like they belonged to us equally. Hyphenating our last names was a given, but we knew it was important to really show that she would truly belong to the both of us. I’m Lauren Arlington, happily and equally married to Richard Kipsy, and people like to tell us we’re odd or wrong. But ask my kids Lauren-Richard Arlington-Kipsy and Richard-Lauren Kipsy-Arlington if they’re happy, and they’ll say yes.

Richard and I were first blessed with our beautiful daughter in April of 2001, and it was important to us to clearly mark her as both of our offspring. We wanted her to grow up in an open and accepting world, so we gave her all four of our combined names for her to carry with her forever. Lauren-Richard is just like any other kid, except that she knows the importance of equality and what it feels like to be an outsider. Her classmates may keep their distance, but that’s only because they wish they had as equal a life as she has. Plus, she’ll realize when she’s older that they were just a bunch of bullies doomed to fail in life. Also, her last name has my last name first and my husband’s last name second. After all, she is a girl and so am I.

Since Lauren-Richard was a girl like me, my husband and I knew it was only fair to have a boy next. Fortunately for us, in October of 2005, we were blessed with the little boy who would complete our household in fairness and equality. Richard-Lauren is everything we could ever ask for in a son, except for his occasional temper tantrums over having “the gayest name in the seventh grade.” What’s gay about getting to have your dad’s last name first and your mom’s last name second? That’s pretty manly, if you ask me!

Sure, their last names are different from each other’s, and from mine, and from my husband’s, which makes things pretty difficult when it comes to official documents and banking. But the frustration we go through every time we try to check into a hotel is worth it, for reasons of equality.

On a side note, Lauren-Richard and Richard-Lauren ran away from home last week, presumably to explore their identity on their own terms. We believe they are going by the names Tiffany and Rock. Please, if you see them, bring them back to our equal little home.

All Women Are Beautiful, Except For Me ‘I’m Proud Of My Cellulite!’ Is What I’d Say If I Had Any Cellulite