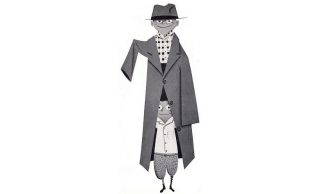 They say that all women have a type, and I should know. The men I date always turn out to be two kids on each other’s shoulders wearing a trench coat.

The first time it happened, I figured it was a fluke. When “John” picked me up, I was immediately drawn to his youthful energy and playful gait. When we arrived at dinner, he said, “My mom loves this place. She’s always taking me here!” Finally: a man who was comfortable talking about his mother, I thought. My heart fluttered. When John ordered “pisghetti and milk,” spilled both all over himself, and eventually stuffed portions of the meal into his shirt, I assumed he was playfully trying to lighten the mood. But I should have known that he was really two eight-year-olds sitting on each other’s shoulders.

Later that month, I was sure I’d found a good thing in “Dan.” He had an easy smile and a lithe profile, standing a full head taller than me. He suggested we “play in the park,” and I was charmed by the sweet simplicity of the date. As I watched him descend the playground slide over and over and over again, his wormlike body sometimes appearing to come apart within his clothing, I could see our future—the Colonial in Connecticut, the tree house he’d build with our boys—all laid out before us. But unfortunately, Dan was a child on top of another child within a trench coat.

“Michael” and I had so much in common that I was certain he couldn’t possibly be a third grader with another third grader sitting on his shoulders. What are the odds, anyway? We met at the Museum of Natural History, where we took in the latest exhibit on dinosaurs. He told me how he loved cartoons, and that he didn’t “really get why grown ups don’t like them.” Was this the man who will finally accept my non-ironic love of SpongeBob? Had he seen the Game of Thrones finale? “Nope,” he said, “I can’t watch that stuff.” Here a man stood before me, slightly off balance, completely sensitive to violence. Was he too good to be true? And then Michael sneezed, and I offered a “bless you,” and he said, “Thank you.” But it came out muffled, from somewhere inside the middle of his coat. Yet another heartbreak.

But there’s no need to pity me, for I’ve finally found a man—a real man—this time. Tom is sensitive, loving, gentle and mature. And best of all, he has truly lived and struggled. I know this because when I suggested we meet for a drink, he said, “I’m not allowed to have that.” I’ll take a recovering alcoholic over two kids stacked on top of each other any day of the week. I just can’t wait to see what’s under his trench coat.

I Didn’t Want to Know I Was Pregnant I Almost Had an Aborsh!