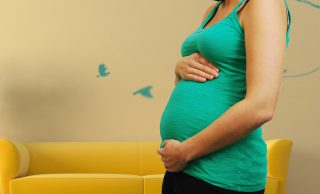 Every woman dreams of not getting pregnant. While my boyfriend and I remained not-pregnant for several years, we both knew that our mutual dislike for condoms and my constantly forgetting to take the pill meant we wouldn’t stay not-pregnant forever. So when I missed my period for three consecutive months, I did what any 26-year-old with vague plans for her future would do – I completely ignored it.

After gaining 25 pounds and starting to feel what could only be described as, “a tiny baby kicking its tiny developing foot up against my uterine wall,” I finally purchased a pregnancy test, but threw it out immediately and refused to look at the results. It’s a rule: If you don’t look at your pregnancy test, then you are technically not pregnant. Knowing would have only made things harder.

As time went on, people kept touching my stomach and congratulating me. Members of my family kept frantically calling me, asking if I’ve “gone to the doctor” and urged me to “take responsibility,” but I would just start texting someone and immediately forget everything that they said.

One day while in the office, I started peeing uncontrollably and then felt like I really had to poop. My coworkers became concerned and forced me to go to the hospital where the doctors immediately told my office manager Cheryl that I was in labor. Cheryl replied, “I know. We’ve been trying to get her to go on medical leave for weeks.” I blocked it all out by continuing to text.

After several hours of labor, which I spent alternately asking for more drugs and screaming, “I’m pooping! I’m just pooping!” I delivered an inexplicably healthy baby girl who I named Siri and then immediately put up for adoption because, as the doctor put it, I am “deeply irresponsible” and “unfit to be a parent.”

Looking back, I’m happy with my experience and to have not every really acknowledged the whole pregnancy thing because Jesus, the thought of having a kid is terrifying and I’m so glad I never had to face that responsibility.