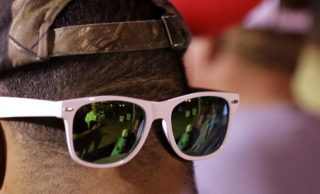 My boyfriend Dave and I hit it off immediately, chatting about craft breweries and this really chill cashier at Whole Foods. We started dating and our relationship blossomed—we could do anything together and have fun doing it.

We were getting ready to go on a hike and everything was going according to plan. But, as he strapped on his backpack with one hand, he grabbed his sunglasses with the other, and before I knew it, my world had fallen apart.

That moment changed our relationship forever. He was now the guy who puts his sunglasses on the back of his head, and I was the girl who was dating him.

Dave wore sunglasses on the back of his head with every ounce of sincerity in his body and I was overcome with a dizzying nausea. “What are you doing?!” I screamed. He was scared. He thought I was asking about the hike. Dave—my Dave— acted as if he had done this a million times before, as if this wasn’t the first time someone close to me had ever committed such a tasteless, hurtful act toward me.

I felt betrayed. He never mentioned this in the beginning; never even showed any signs, like wearing his cell phone on his belt or tucking his shirt in his jeans. Had he been doing this behind my back for the duration of our relationship? Why on Earth couldn’t he just rest the glasses on top of his head or even hang them off of his shirt collar?

I ran through his next possible steps in my head—casual camouflage in his every day wardrobe? Cargo shorts? Truck Nuts? That fucking belt clip? Could I stick around to find out?

Although it destroyed me emotionally, I knew I had to leave him. Dave and I had shared sixteen wonderful months together but I just couldn’t bring myself to continue on with someone who wore sunglasses on the back of my head. That Dave is a stranger to me now.

I ended things the next day. Dave didn’t see why it was so disturbing for me to see him parading around with sunglasses just dangling off of the back of his dome where sunglasses were never meant to be, but that’s what I learned. Some people will turn on you in a moment, and I’ll never trust those people again.