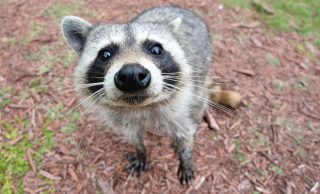 Tanner and I broke up six months ago, but neither of us have moved out of our apartment. Our friends and family don’t understand, but it still works for us. Everyone just needs to accept that I still live with my ex, and also this wily raccoon.

Tanner’s been really considerate about the transition, but I’m not sure I can say the same about Bandit, which is what I’ve reluctantly named the stray raccoon that wandered into my pantry one night scavenging for morsels. Tanner’s an easy roommate; he mostly plays video games in the living room and looks for a job. Bandit resides in spaces between the walls and often chatters and scratches at herself throughout the night. It’s the life I’ve chosen to live and it works for us. At the end of the day, it’s really none of your business!

When I tell my friends that Tanner and I still live together even though we’re no longer a couple, most people are shocked. Don’t we fight? Don’t we want to move on? Don’t we feel terrified about the rogue raccoon that runs rampant inside? Sure, but we also have nine months left on our lease and don’t want to find subletters. Sure, Bandit’s feces are a health hazard, but we’ve just kind of given her the kitchen and are hoping she doesn’t take over anything else.

I admit that it was difficult when Tanner started dating again. I won’t pretend that it wasn’t hard finding out that he had moved on emotionally. But it wasn’t any harder than when Bandit had a nest of raccoon kits, finally succeeded in chewing completely through the bathroom, and permanently moved under our sink.

I’m just trying to keep an open mind and love myself through this transitional time.

In the end, I know that living with my ex-boyfriend and a rascally wild animal isn’t for everyone. And I can understand why a lot of people choose not to. But this is my life, and I’ll do whatever I want—as long as Bandit doesn’t bite me again.

It’s Important That You Vote With My Conscience This Election Why I Stopped Searching for Mr. Right and Found Doug Who Is Fine