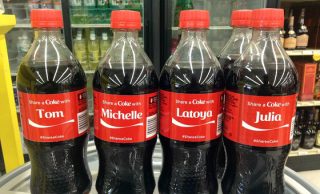 At first, I tried not to let it get to me. “Just take one that says Alicia or Jackie,” I’d whisper to myself, brushing away tears in a gas station convenience store. “It’s no big deal.”  And it wasn’t at first. Sure, every time I walked up to the cash register with a Coke can that said “Sam” or “Buddy” or “Grillmaster,” a little bit of me died inside. I’d feel the brief twinge of hope followed by crushing disappointment when that “Rick” can came tumbling out of that Coke machine ate at me, as if to say, “Hey freak, be a pal and give this to Rick, will ya?”. But I shrugged it off. You have a weird name, I would tell myself. You knew this was never going to happen for you.

That’s when realized that I wasn’t just buying Coke cans: I was buying into a narrative that said You aren’t worth it. Just because your name is two full lines of typed text and includes the Chinese symbol for peace, you will never see your name on a can of Coke.

By pretending like it was okay for Coke to refuse to put my name–even though part of it is the chemical symbol for Barium–on a can, I was participating in my own discrimination. If you don’t think that’s discrimination, then I’d invite you to check your privilege, Amy.

Your name’s probably Amy, isn’t it?

Do I hope to see my name on a Coke can? Goddess knows, I do. It’s something I’ll fight for. It’s something – and I don’t think I’m being dramatic here – I’ll die for. But even if it’s too late to change things for me, maybe by sharing my story I can change things for future generations. Maybe one day, a strange name won’t make you a blind spot in mass marketing stunts. Maybe one day, the fact that my entire name is technically a shortlink to a Fiona Apple album won’t mean that I’m given the short stick.

My name may be too strange to belong on a soda can, but I’ll tell you where it does belong: history. So you write down my name and you remember me. Well, okay, technically you can’t write it down because if you write it down it transforms into a really powerful incantation that summons the dead and blah blah blah it’s a whole thing.

Still, remember me. And don’t you dare ask if I consider myself a modern day Rosa Parks. Bitch probably got her name on a Coke can.