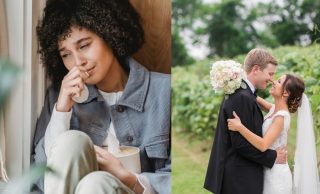 At a certain age, you think you know yourself: You develop your worldview, your values, your ideals, and you nurture these tenets of selfhood to be malleable yet strong, like a super flexible horse. Yet this too can all come undone. And that’s exactly what happened to me when I wept tears of pure emotion at a random straight wedding I attended as a plus-one.

How could this have happened?

When I undertook the role of straight wedding guest, I thought I was totally in control. I planned to pay for half a toaster on the registry, put on my best little gay outfit, and raid the open bar, all while internally castigating this garish display of heterosexuality, traditional gender roles, and “funny” best man speeches. I was a beacon of queer subversion for the first 20 minutes of the night.

While I totally held it together at a cool remove while guests filed inside for the ceremony and took their seats, my first tears started rolling as soon as the “bride” took her first steps down the aisle alongside her teary-eyed parents. I tried not to read too much into this as it was obvious that I was being emotionally manipulated by the string choir’s saccharine rendition of “Here Comes the Sun”. The reverberations of music vibrate our bones which makes us get chills and cry — that’s science! But as time went on, I began to fear this response couldn’t all be chalked up to the cold, hard laws of physics.

After this horribly disorienting event, I lost control of all my faculties. I initiated a conga line; I hoisted a flower girl onto my shoulders, I put a tie around my head, all with tears streaming down my face.

While I am shaken to my core by being so moved by a cisheteropatriarchal bourgeoisie ritual, the good news is, everyone assumed I was simply an emotionally disturbed distant relative, which is fundamentally punk rock. Anyway, gotta go check the wedding website to see if they’ve uploaded any photos!!!

How I Escaped Today’s Rapid Trend Cycle by Dressing Like Mr. Tumnus I LIVED IT: I Couldn’t Tell if My Laundry Was Wet or Just Cold