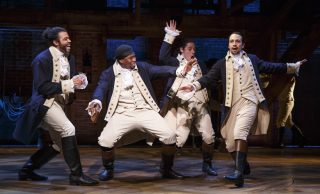 I’ve always seen myself as someone who’s in touch with her sexuality. I know what I like. So a few days after the release of the new hit musical Hamilton’s soundtrack on iTunes, when I felt some new urges and changes happening to my body, I became confused.

At first, everything seemed normal. I was enjoying the soundtrack and going about my life as usual. But then one night when my boyfriend and I were going at it and I was close to the moment of climax, I felt a peculiar urge to hear Alexander Hamilton rap about consolidating the post-Revolutionary debt of the newly formed United States. When I reached over to synch my phone with our Bluetooth speaker to play the song, my boyfriend was slightly off-put, but quickly let it go when I loudly orgasmed to Hamilton asking, “Are we a nation of states? What’s the state of our nation?” I’d never felt such a tremendous release in my life.

A few days later while we were making out on the couch, the urge hit me again. This time I couldn’t even seem to get aroused without listening to George Washington explain to his protégé Hamilton that he wasn’t planning on running for president again in order to allow the fledgling nation to transition smoothly to new leadership. I put the song on and we quickly got down to business. When I screamed, “One last time!” along with Washington, my boyfriend thought he had given me multiple orgasms. Little did he know that a fire had been stoked in me that was causing me to rise up like the colonies themselves.

In the days that followed, I found myself unable to come without at least hearing, say, Hercules Mulligan or John Laurens drop a sick rhyme about loco parentis or leading America’s first black battalion. But now it’s gotten to the point where the soundtrack actually has the power to control my sexual response directly, without the need for physical touch at all. I don’t need my right hand or a man. That immigrant—he get’s the job done.

Have you ever felt the thrill of a climax caused simply by hearing that Alexander Hamilton wrote 51 of the 85 Federalist Papers? It’s like nothing you’ve ever experienced, so deeply does it emerge from the core of your very being. Frankly, I don’t even want to be touched anymore. I just want to hear Burr tell Hamilton, “You punched the bursar.” Are you fucking kidding me?! Rhyming “Burr, sir” with “bursar”? I literally came now just thinking about it.

This is my life now. I am at the mercy of Hamilton: An American Musical. When Aaron Burr tells me to “wait for it”, I do. When The Schuyler Sisters tell me to “work”, I fucking work. I am a sex slave to a Broadway musical soundtrack, and I willingly submit to its power over my body and soul.