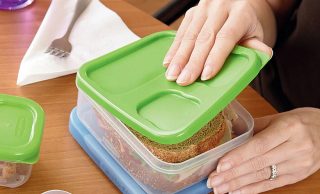 It was a Wednesday just like any other Wednesday, until it hit me. I don’t know what it was—maybe it was my new “Imagine” scented candle—but when lunchtime came, I had this urge to just get out of my chair and step away from my desk and eat lunch somewhere else entirely.

My cubicle mate, Terry, turned to me, and I’ll never forget what she said: “Where are you going for lunch?” I hadn’t even thought that far ahead. Where was I going for lunch? Well, I decided, definitely not here. So I told Terry I was going out. She didn’t respond because she was watching a video of a chimpanzee picking out a special date outfit, so I put on my before-and-after-work coat and left, just like that.

It wasn’t as hard as I thought it would be, to go out that door. Even though it wasn’t 5 PM, it almost felt natural to walk out into the sunlight. But as soon as I got outside, I was immediately overwhelmed.

Yes—and my coworkers asked me about this afterward—it was bright outside. The sun blinded me with the force of a thousand computer monitors, but still I managed to cross the street. There I discovered that there was a park where other people seemed to be eating. My legs were tired, and I was out of breath, but I made it to a bench. Walking felt strange when it wasn’t disturbing people’s workflow. Starving, I quickly opened my lunch bag and started in on my turkey on wheat. After a couple of bites, I began to look around. I realized I was searching for something to read, an email to open, something to click. But there was nothing—just wilderness.

This is like that movie, I thought to myself.

Wild squirrels and pigeons darted towards me, searching for crumbs. And although they were animals, they were more interested in me than my coworkers, who only ever want to sell me Girl Scout cookies. Suddenly I would have given anything for a Tagalong. I wondered what Terry and Nicole were doing back at the office. What were they watching? Was anyone looking for me? Was I needed? I checked my email and voicemail, but there was nothing.

It began to get cold, and I shivered, wishing I had a warm Swiss Miss from the office kitchen. I leaned back, but my sturdy office chair was not there to catch me. That’s when—I’ll admit it—I panicked and thought about going back inside. Luckily, Jorge from accounting walked by and said “Oh, hey! You’re outside!” He was right: I was outside. His kind and moving encouragement really helped me keep going. I sat up straight and focused on my sandwich. I knew I could make it for at least a half hour. Then my phone buzzed—an email! I was needed back at the office. Thank God! This adventure had been fruitful, but it had gone on long enough.

I ran back to my desk, startling Terry. She looked at me like she could tell something was different, and she was right. I will never be the same. Yes, I ate the rest of my lunch while answering an urgent email about copier paper, but I was proud of myself for getting out there. It’s just like they tell us in all-company meetings: Trust the process!

I’m not saying that eating away from your desk is for everyone—it can be tough out there, away from your desk home—but it has given me a whole new perspective. It’s as if I saw my life from the outside, while I was looking in. Now I appreciate my coworkers, and I really value the shelter of my desk, which is why I haven’t eaten away from my desk since, but maybe I will again one day. Who knows what I’m capable of, now that I’ve had a real lunch break? I might even start working from home on Saturdays!

I’m the One Who Farted in the Cab Last Night I’m on a Plant-Based Diet, But I Still Got Pregnant