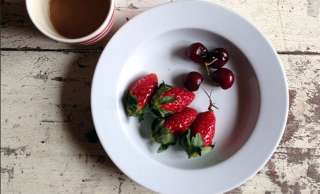 A year ago, I embarked on a life-altering journey by committing myself to a plant-based diet. How did I come to embrace such a beautiful, holistic lifestyle? Well, my coworker Amanda read an article about it, and then I saw a bunch of vegan recipes on Facebook and they looked really easy! I thought, If it worked for Beyoncé, I’ll give it a shot.

To my surprise, I loved every second of my weird, new, ethical eating habits. Everything seemed to be going along fine—until a few weeks ago, when I realized I was pregnant.

How could this happen to me? I hadn’t strayed from my vegan clean-eating plan even once, and still I somehow managed to get pregnant. Who would have thought this spartan diet would lead me to pack on the pounds because I was pregnant?

As I try to make heads or tails of what happened, I always come back to the beginning. Starting a plant-based diet was intoxicating, and at first, everything seemed to add up. I learned that plant-based diets block toxins from entering your system, that chicken nuggets are full of antibiotic-resistant bacteria, that ingesting even one little cube of cheese will ruin your gut flora for months—and don’t even get me started on free radicals.

Unfortunately, the magical benefits of plant-based eating don’t seem to extend to sex.

When I saw how amazing I felt after adopting this diet, I naturally threw away all supplements and medications—including my birth control. Apparently that was a mistake.

I had watched as my new vegan friends transformed from your average slob into vegan-skinny yoga queens. It was incredible! But for some reason, I found myself gaining weight. So I doubled down. I bought nutritional yeast. I drank nothing but smoothies all week. I shoved as much kale down my gullet as I could physically fit.

A few days later I was at the doctor’s office, eating chia-seed pudding and suffering from an extreme case of the runs. Imagine my shock when, instead of congratulating me on my eerily adolescent skin and dangerously low blood pressure, the doctor told me I was pregnant.

“As if!” I laughed. “It’s probably just kale bloat. Have I mentioned I’m vegan now?”

But it wasn’t kale bloat. It looks like my baby was conceived just like every other baby whose parents don’t eat hemp seeds for fun. What’s worse, he probably won’t even be a vegan—at least not right away. “Just…Christ,” said my doctor, shaking her head sadly. “No. Just feed him formula or breast milk, okay? None of that hippy shit. What’s wrong with you?”

Can you believe the benefits of a vegan lifestyle don’t extend to baby-proofing my love shack? When I saw that double line on the pregnancy test, I was convinced it was some sort of error caused by my extreme healthiness. There’s no way I could have conceived that thing! I do not eat meat!!!

What’s wrong with me? More like: What’s wrong with people who eat flesh and use condoms? Answer: A lot. I had so much to live for: animal welfare, sprouted beans, a super-low BMI. Now, all I’m left with is a newfound disillusionment with the powers of the vegan lifestyle.

Although I’m disappointed that mindful eating did not create a protective shield around my womb, it’s time to face reality. I’ll still eat as much homemade nut butter as I can get my hands on. But for now, I am beyond thrilled to welcome this perfectly little future plant-eater into the world.

I Ate Lunch Away from My Desk We Only Speak to Our Three-Year-Old in Hashtags at Home. This is Why.