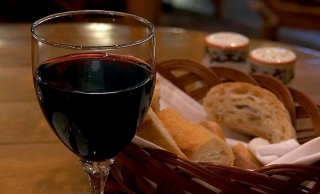 When I went on a blind date last Tuesday, I had no idea what to expect. Would he be cute? Interesting? Unconscionably cheap? I hadn’t a clue. But when I arrived at Ciao Bella Wine Bar, he had already ordered a bottle of Pinot Noir, which just happens to be my favorite wine. Um…hello, MAJOR points for Demetrius! (His name was Demetrius.) Plus, he had a boat, had great hair, and was tall and very handsome lawyer, which I like! Plus, he had only mentioned his ex-girlfriend twice. Maybe it was the wine on an empty stomach talking, but it seemed like we were really hitting it off! That is, until the bill arrived. When the waiter dropped our check, he instantly started doing some sort of weird drawings and writing out numbers on the back of the receipt. I thought, “Is he already drawing me a poem?”

“Demetrius, what are you writing over there?” I giggled. That’s when I saw what he was actually doing: He was calculating how much wine he had versus how much I had.

This man was prorating our bottle of wine.

I sat there in a silent scream, watching him work the figures. “I let you have a tiny bit more than me. I’d say you had about 2.7 glasses of wine. Just let me finish the calculations.” After three whole minutes of silence and me twiddling my thumbs just to keep from scratching my face off, he said, “Okay, you owe $32.”

I kept looking around for Ashton Kutcher, because I most certainly was being punk’d (like they do on the MTV show Punk’d). But no; this was really happening. And now, here we were, and Demetrius was prorating our bottle of wine.

I felt betrayed by a man I barely knew.

After a minor freakout that I kept within the confines of my head, I asked Demetrius why he felt these calculations were necessary. He said: “It only seems fair that we split things fairly. We’re adults, after all.”

I then asked him if we could just split it in half, since these calculations seemed unnecessary. He laughed at this and said it was “weird”.

Demetrius still has a lot going for him; he is over six feet tall, after all. Plus, Demetrius texted me to make sure I got home safely. But how could I ever come around to this man after what happened at that wine bar?

He offered that we go out on his boat next weekend. Sure, he told me to bring my own lunch, (nothing with mustard!) but part of me still wants to give it another chance. But from now on, I’ll only order beer.