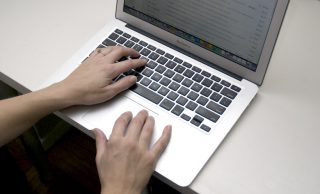 I’m sitting on the floor, wrapped in an afghan, my thin hipbones driving pettily into the floorboards, taking in the new emptiness that has settled over my house. “My house.” The phrase feels strange to type—it used to be “our house” but now there’s no “our”—just “my”. My house. I look at my house and its emptiness. The emptiness fills up the space left behind by Mark, who is gone now. He is gone from here, but somewhere, he is there—in the arms of another woman, a woman who is not me. I almost want to love her, because I love him, and his love is mine, and she is his love—but I cannot. The hate swells in my belly and floods up to my throat. She is that worst type of villain: destroyer of hearths. And still, he chose her over me.

I can’t bear to say it, but it’s the truth I now live: He left me for some dumbass idiot who puts two spaces after periods like she thinks she’s smart or something.

I learned of the magnitude of his betrayal the day he left. He woke me up in the middle of the night and told me he didn’t love me anymore; that he couldn’t live a lie for one more second. I thought he was sleep talking again, so I rolled over and went back to sleep. He was gone by morning, along with all of his belongings. I was in shock. I called him over and over—no response. I texted him; the messages bounced back. I sent him an email so full of rage and love and blood and pain—still nothing. A few hours later, as I lay curled up on the bottom shelf of my fridge, I received an email from a woman with no subject. Strange, I thought. I don’t know anyone with such poor email etiquette. I opened the email to reveal the following message:

Hi. We don’t know each other, but we both know Mark. Also, we both love Mark. But Mark loves only one of us. That’s me. I am sorry to say this all, but its true. Please let him go. It’s been over between you for a while, and you know that. Sorry again.

I lay there, stunned, my hand curled angrily around the crisper’s crispness knob. Whose life was this? Was this my life? It couldn’t be; my life was good, and not a nightmare, and certainly not a nightmare wherein mega-wrong assholes typed my defeat. I couldn’t accept it then and I can’t accept it now.

What kind of woman steals the happiness of another woman, as if we are not all sisters? And what kind of woman voluntarily puts two spaces after closing punctuation? The answers to those questions are “a bad woman” and “a bad woman whose spacebar is apparently rigged up to a money machine that pays her cash every time she hits it,” respectively.

It’s hard to picture the man I loved—the shoulders I clung to during our first dance, the hair I stroked lovingly as he fever-dreamed, the hands that ably carried my grandmother to her final resting place—torching our life together in favor of someone who apparently went to elementary school in Dumbasstown.

Women are girls first, and then they become young women. Young women are taught to be electric, wild, free; that they are special, untouchable, immortally desirable; that neither age nor mundanity nor harshness will ever conquer them. Then, cruelly, we become just women, and must endure humiliation after humiliation, accept our dethroning by once-girls who are now young women, and eventually unlearn our specialness—the way most sane people unlearn putting two spaces after every sentence. Who still believes the shit they were taught by that one weird computer lab teacher in third grade? Who still holds onto that? Did a ceiling tile fall on her head when she was ten and using a computer for the first time and she’s now stuck in that day forever like that Adam Sandler/Drew Barrymore movie? What other explanation is there?

I mean seriously, is she 100? Was she taught by wolves? Were the wolves dumb? Who is still teaching people that this is right? Where are they and can I start an educational outreach foundation to eliminate them?

We are all authors, our lives are our stories, and each paragraph is a life experience through which we captain ourselves. And now, after eight years of marriage, all his paragraphs will look like loose turds because of all the extraneous spaces because he’s dating a woman who hits the spacebar twice after sentence-closing punctuation. I picture her rubbing one of those stupid, shitty thumbs over his lips the way she runs them unnecessarily over that long, thin key, and it makes me want to give up. How can love exist when it ends? And how can it end at the twitchy hands of a double-spacer?

Perhaps then there is no love. But then, too, there is no heartbreak. And if the sweetest feeling I can get is from correcting the grammar in the comments section of listicles, well then, I suppose that’s enough for me.