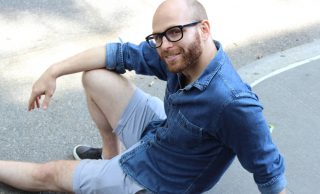 Sup ballsacks! Dude Corner here. Nowadays, it is difficult to be a caring man in American society. Disgusting men like Harvey Weinstein and Bill Cosby have made it so that we’re all now expected to operate like robots around women. And just because of them, suddenly me hugging every chick I meet and giving every bro a firm handshake is “not okay”? As a man who was raised to be super in tune with my feelings, I think that is total fucking bullshit. Don’t make me punch this wall!

As a believer in feminism, I don’t think that I should change the way that I have usually interacted with women just because there is heightened scrutiny from the #MeToo movement. Women are emotional creatures and they universally love close and intimate hugs.

Anyway, how else am I supposed to let my coworker know that I care about her and think she’s doing a great job if I don’t give her a tight and secure embrace?

Anyone who knows me will tell you that I love women and am an ardent supporter of women’s rights. Once, in college, I got into a fight with some dude at a party because he called my friend a bitch. She was acting like a bitch, but you shouldn’t call women that y’know?

I just believe that western civilization and chivalry as we know it is under attack.

And don’t say this is only about looks – I hug them even if they are only medium-hot!

Yes, I believe that women should be treated equally as men, but you cannot deny biology. Because of evolution, men have to grip each other’s hands when they meet to swiftly determine which of them is stronger. To do this to a woman would basically be an assault, and worse yet, just weird. That’s why I reach my arms around them and press my body against theirs.

Women are strong and amazing beings. They run businesses, lead nations, save lives, all while taking care of snot-nosed kids! To be honest, I prefer interacting with them more than I do with men. I would feel safer as an American with a woman president. And if a woman were president, and I had the honor of meeting the Commander in Chief, you can bet I would go in for an overfamiliar squeeze. That’s just the way things should be done.

We All Love Jeff Goldblum. Here’s Why the Way I Love Him is Actually Unique How I Stuck It to Beauty Standards by Adding More Ribs to My Ribcage