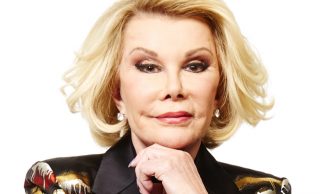 Ever since September, I’ve been plagued by a little voice in the back of my head, ripping on my style choices. Most women deal with some kind of an internal critic, but what I’m dealing with is way, way out of the ordinary.

At first I thought it was my imagination, or my internal self-doubt taking on a new shape. I’d dealt with catching my reflection in a store window and thinking, “I look like a frump,” but now my self-critical thoughts were more along the lines of, “You look like if Morticia Adams took quaaludes and ran through a Coldwater Creek factory outlet. I mean, come on!”

“Surely, it’s in my head,” I thought. “Maybe I left the TV on in the other room.” But the whispers continued, day in and day out. And that’s when I realized: I’m being haunted by the ghost of Joan Rivers.

The endless fashion criticism continued. After putting on a cute peasant blouse: “Go till the fields somewhere else. This is Hollywood, not medieval France, for God’s sake!”

After getting out of the shower: “A towel turban? Who is she, the Sheikh of Bed Bath & Beyond?”

After a few weeks I began to realize that I was in the presence of a ghost. An acerbic, trailblazing ghost who hated my outfits. It wasn’t until I caught a glimpse of her out of the corner of my eye as I assessed my new feather earrings in the mirror – it was the ghost of Joan Rivers herself! And she hated everything I was wearing, which I probably should have expected.

I could sense it was her through the posture, the outline of the fox fur scarf dancing around my room in the dark, the glamorous-but-restrained diamond earrings that kept turning up in my closet, but most of all, from the witty-yet-cutting remarks made about my fashion choices.

The hauntings occurred primarily in my bedroom. When I was dressing for the day. I’d hear my door squeak and catch a whiff of Coco Mademoiselle by Chanel and then the criticisms would start. I couldn’t even try a sheer button-down with a pencil skirt without hearing, “What is this outfit? You look like a hooker trying to blend in at a PTA meeting.”

I’d try to shake off my hurt feelings, reminding myself this was JUST the ghost of Joan Rivers, and people weren’t hearing her words on live television. Then I’d feel another chill on my neck and she’d come in with another scathing slam dunk.

“I’ve heard of reduce, reuse, recycle; but do you really need to wear a plastic bag?” Burn.

I tried talking to my friends about it, but they would either ignore me or just blindly agree with the ghost of Joan Rivers. “Look, she’s a Hollywood icon. And she’s usually right! Seriously, pink hair? You’re 30.”

So I learned to keep my Vogue-aspiring hauntings buried deep inside the jacket deemed “so drab I think I just died twice of boredom looking at it.”

And there she’d be, floating above my bed remarking how my purple comforter would be better suited to a closeted 11-year-old Catholic schoolgirl. Or she’d be haunting my lingerie drawer, whispering tart nothings about how she wasn’t much for women’s lib but maybe I should burn some of my bras.

The past two weeks I haven’t heard from her ghost, no spare emeralds mysteriously turning up by my nightstand, no shafts of Dolce and Gabbana perfume.

When she was haunting me, I thought she was a little too hard on my appearance and wished she weren’t so mean. But now that she’s gone, I miss her. I believe she’s gone to a better place.

I just wish I had gotten her opinion on my nose job.