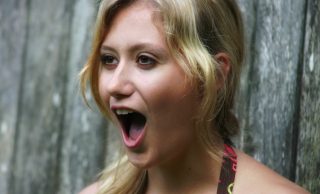 Hi, it’s me, your skinny friend, Katie. It seems like everyone is always talking about things I don’t quite understand. These things sound awful, for sure, but I just really don’t know what they are.

For instance, the other day I was grabbing pizza with Callie and Marjon (just water for me, thanks) when we started talking about shopping. I mentioned that Zara carries my perfect dress size, so I’m stocking up on them (I’m freelance but the hours have been pouring in – I can afford it). That’s when Callie said she would love to wear more dresses but couldn’t stand “chub rub.” Marjon started nodding and laughing, but I just froze – and not just because in the middle of my midday meditation. Chub? Rub? The words hung in the air like me at an aerial yoga class. I was so lost.

Callie informed me that “chub rub” (?) is when your thighs rub together (let me know if I’m going too fast) and chafe while wearing skirts. My thighs have only ever touched once, when my musician friend’s private jet made an emergency crash landing. I fought past my confusion and provided an empathetic, “Really?”

I think she felt better after.

And that’s just the tip of the iceberg, of which I have climbed several in my husband’s home country. After discovering my friends’ bodies were evolutionary mishaps, Marjon went on to talk about some recent boy drama she’s been having. She’s been on-and-off flirting with a guy and was talking about not feeling attractive to American men as a woman of color. What? I always thought men liked exotic women, but I never really thought about it much because my husband is named Bjørn. The only fight Bjørn and I ever had was about whether or not my usual 20-minute orgasms count as more than one orgasm. This was actually even more confusing than the chub rub, so I just silently nodded and put my hand on her shoulder.

She was soothed, probably.

But that’s not even the half of it: They wanted to grab cupcakes after (I’m good, thanks), when we ran into our friend, Leah, who said that she’d been feeling depressed lately. She’d lost motivation to do things that she usually does, and was feeling really down on herself, and had been crying a lot lately. What? Was this the chub rub again? I thought, “Maybe she’s speaking Greek or something.” Then I thought, “No, I’m fluent in Greek.” Still, I mustered up a concerned, “Wow.” But guess what? Callie and Marjon didn’t even say anything! They just wrapped their arms around Leah and said, “We understand,” as she wept openly on the sidewalk. Um, okay? I just kind of stared at them and suggested that Leah try exercise because if there’s one thing I know, exercise will make you feel great all the time! But then my eyes drifted toward delicate upper arm cuff in the jewelry store display that would look great on me at the beach.

It really is hard having to keep up with everything that all my friends have going on in their lives when I just truly have no understanding of it. Honestly, I could use my entire solo trip to Vienna to think about it, or maybe even think about it when I’m hand rolling my own noodles for my weekly You Deserve The World dinner. I could even ask Bjørn (very tall).

And I still think I just won’t get it.

Hey, David, I’m Outside Your Door LOL DIY Crafts Even My Dumbass Son Could Do