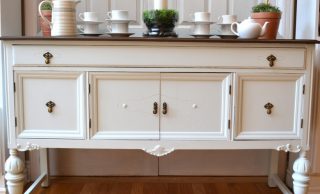 “To err is human. To forgive, divine.” – Alexander Pope

Last year, my husband, Mark, and I left the sprawling suburbs of Kansas City, MO for San Francisco. I said goodbye to my friends and beautiful Antebellum home and packed everything we owned into the moving truck. As we hopped on our first class flight to our new home, I yearned to be surrounded by my belongings in that truck. What can I say—furniture is who I am.

We arrived three days before our treasured possessions. With nothing in my home to look at, I decided to walk around and get to know my new hometown. Stopping into an immaculate antique store was the only way to stop the ever-present ache that had become a part of me as I awaited our furniture. The shopkeeper, Celeste, and I engaged in a conversation about Yellow Birch vs. Beechwood. When closing time drew near, I knew I had to buy something. It would be a gesture to seal our friendship.

“Celeste, I’d like that buffet displayed in the window. I’m buying myself a housewarming gift!”

If only I had known.

The morning of the delivery, both trucks pulled up at the same time. The antique movers had my buffet out and up the path walking alongside the movers. I told them to rest the buffet in the front entryway. The burly local men gave a double-take.

“Lady, your sideboard is right out side.”

A sideboard? Not a buffet?! This had to be a mistake. They are only movers, after all. In my shock, I blurted, “Its a buffet. I know it is!”

“That ain’t no buffet,” replied one of the movers, “That’s a freakin’ sideboard. You gotta get your head screwed on straight. You still want it in the entry?”

I nodded numbly, trying to hide my shame and told them I was just tired from the move. The rest of the day was a full of second guesses.If I didn’t know a buffet from a sideboard what else didn’t I know? Did I “know” where I wanted the chaise lounge? The matching Tiffany Lamps? The De Kooning?!?!

I didn’t know how I was going to make it through that day, let alone the rest of my life. As I rested my head on my 4,000-count Egyptian cotton pillowcase that night, I felt defeated … and then, stronger. Not only had I learned a valuable lesson about shopkeepers who call themselves “curators,” but I also had a brand new piece of furniture to love. You see, you can look at your new piece as an improper buffet, or a beautiful sideboard. It’s all in your perception of things. I know that now.

Since then, I’ve learned to accept the sideboard as one of my own. Celeste rightfully went out of business after my successful smear campaign, and Mark was killed in a horrific car wreck a few months back. But still, sometimes when I’m pulling out the Lladro salt and pepper shakers for St. Crispin’s Day, I glance at the sideboard’s short or absent legs and think, “You were a beautiful mistake.”