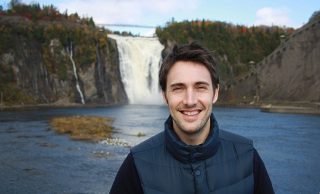 To me, it was any other Thursday. But to Frédéric, it was Saint-Jean-Baptiste Day.  He bought me a Pinot noir, and himself a Labatt Blue. “To the provincial holiday,” said the foreign stranger. He settled the tab, leaving no tip. I asked why not, and his cheeks became as red as the room in Henri Matisse’s Red Room. “It is the French way!” He explained, “I always forget that I must leave a looney here in the states.” He was a looney, all right, and I was falling hard.

My short time with Frédéric was a Parisian vacation. His words were butter melting on a fresh croissant. He spoke of his homeland: riding “le metro,” dancing at “le club,” listening to “l’Arcade Fire.” He missed the smoked meat, bagels and poutine. “Have you had poutine?” He asked. “Of course,” I replied. I love fish. I love eating it and seeing paintings of it, like Henri Matisse’s Red Fish. “Poutine is not the same here,” he smiled, “you must try true poutine, Margaret.” But he pronounced my name “Marguerite,” like how Henri Matisse would pronounce the title of his painting, Marguerite.

Our whirlwind rendezvous ended at a quiet café. I ordered a Sauvignon blanc, Frédéric ordered a Moosehead. The waitress demanded our IDs. Frédéric unveiled a blue passport. Blue like my own, but slightly unfamiliar…

Then I saw the least sexy words a Francophile can see…

Frédéric was not French. He was French Canadian.

I was heartbroken and vulnerable. Blue and nude, like the painting Blue Nude by Henri Matisse but not as beautiful or brilliant or French. If I stayed with Frédéric, my Henri Matisse references would have to be replaced with Paul-Émile Borduas ones – he’s this Québécois artist I Wikipedia’d. I wanted out.

I uttered one final question to Frédéric:

“What does ‘poutine’ mean?”

I soon realized that I’d been confusing the word with poussin. Bitter reality served me starchy fries, gravy and cheese curds.

I walked out of the café before that Canadian loser could beg me for a green card. Il était très embarrassant.