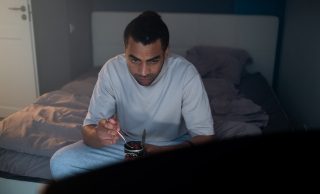 From catfishing to bad vibes, we all have our dating horror stories. But I have one that will chill you to your core, because even when you think you know someone, they can still let you down in the worst possible way. Everything was going fine with Alex for a few dates, but the terror started when he invited me to his place for a casual night in. I went over, fully expecting to watch HBOMax or at least Netflix – but then he turned on his TV and immediately went to Peacock.

It was all he had.

I tried to keep my confusion from showing as he scrolled through his half-watched Law & Order SVU episodes. Maybe he had just gotten a new phone carrier and was offered a free trial? But as I saw that he was also fully caught up on Law & Order: Organized Crime, the panic rushed in. This man was deep into the Peacock collection.

To keep things lighthearted, I casually suggested watching the new season of Stranger Things instead, but to my absolute horror, he replied, “Nah, I don’t keep up with that. Besides, Chicago Fire is much better.” It took all my willpower to stop from running out of there, screaming.

I like to keep an open mind – Alex was great up until that haunting rainbow dot logo came up on his screen like a goddamn jump scare. Maybe he just wasn’t a Netflix guy. So I tried, I really tried, to give him another chance. I suggested Only Murders in the Building, Westworld, The Boys – I even said I was down to watch regular cable TV like it was the 90s!

But any hope of salvaging what we had was gone when he uttered the scariest words a woman can hear on date, “Sorry, I only have a Peacock subscription. Wanna watch the new Saved By The Bell though?”

My vision got blurry for a second and I nearly fainted, but luckily I held onto my consciousness enough that I could escape.

Now I can overlook a few flaws – nobody’s perfect – but this was fucking sociopathic. I got the hell out of there before he could go on a spiel about how much he’s missed Mario Lopez’s acting.

As I went back home, I realized the red flags were there. I should’ve known when on our first date, he kept only referencing Girls5Eva – but I just thought he was a big Sara Bareilles fan! And when he raved about how funny Glenn Howerton was, he must’ve meant in A.P. Bio, not It’s Always Sunny in Philadelphia like every other regular human being. I guess hindsight really is 20/20.

So I hope you use my story as a cautionary tale – looks can be deceiving, but so can personality. If you want to know someone’s true self, look to their streaming subscriptions. And if someone invites you over to watch something, always, always find out if they have Hulu, HBO, Netflix, or the coveted Showtime subscription before going over.

Why I Always Use Corn Holders When Sucking Dick How I Found Love When I Least Expected It by Covering My Eyes and Chanting ‘Hate, Hate, Hate!’