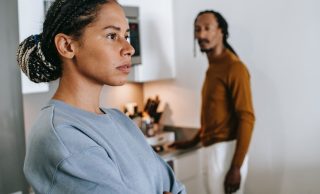 In relationships, it’s always important to be honest and have a steady foundation of trust, but recently I’ve learned that this has its limits when my boyfriend told me about all of his exes after I forced him to tell me about his exes.

Nothing, and I mean nothing, could have prepared me to hear such heartbreaking information.

Even though I asked him about his exes and what kind of problems he had with them all throughout our relationship, and repeatedly over the last week until he finally broke down, I just can’t believe that he would tell me all of these personal details about his past relationships with these women who aren’t me.

My boyfriend even told me about how he was “attracted to” one woman at first, but then they ultimately grew apart. As if I would ever want to hear that he was into someone before me and also all of the ways he liked her when they were dating, even though I asked him to tell me all of those things specifically.

Should I just bite the bullet and break up with him? At least I know my story will be told.

He also told me all kinds of distressing private information like his exes’ first names and the things that they would argue about. But why would I ever want to hear something like that, even though I begged him to tell me and assured him that I would be completely understanding about it all?

Now I can’t help but feel like my boyfriend isn’t the sweet, caring guy I thought he was when we first started dating. I mean, what kind of monster would ever do something like this?

And sure, I may have pleaded with him to tell me about his exes constantly, but that doesn’t mean I would be okay with anything he told me. And to top it all off, one of his exes was a nepotism baby! So now it’s like, okay… I’m sorry for not having rich and famous parents like her, I guess?

The fact that he’s dated all of these three different girls is so insulting. If you didn’t care about me long before we were dating then why not just save us both time and say that?

I’m not sure if it’s going to work out between us after he threw a wrench into our previously perfect relationship, but I am going to try to see if our connection is still salvageable, after I ask him for his exes’ Instagram handles and then compare myself to all of them in terms of physical appearance, vibes, and follower count. Pray for me!