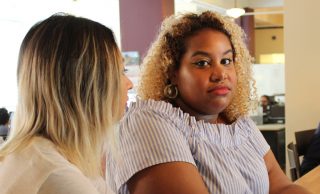 I love my friends, especially because we all come from similar backgrounds. Or, at least that’s what I thought until a recent, fateful girl’s night. We were having some wine and cheese at Rachel’s place, shooting the breeze, when we stumbled upon her middle school yearbook. Of course, Rachel’s 12-year-old version was just as awkward, pimpled, and homely as the rest of us were. We each took turns pulling up old Myspace pics and basking in our shared adolescent repulsiveness, until Kaitlyn threw a wrench in the whole thing. She slapped us all in the face with a photo of her blemishless, straight-toothed, smooth-haired self. And that’s when I realized: Kaitlyn wasn’t ugly in middle school.

You really think you know your friends.

I tried to be supportive, because I knew she had no control over what she looked like as a preteen. But, I’m sure it showed all over my face. I felt betrayed. I didn’t even know this person, this liar who had pretended to be so much like me. But she wasn’t. She was the prematurely attractive husk of the Kaitlyn I once knew.

How was I supposed to trust her going forward, knowing that she’s never felt the sting of being called “pizza face” or “fivehead” or “frizzy lizzy”? How would I confide in someone that I know has never been asked out by a boy as a joke? How could I relate to someone who had never been the focus of a cruel Xanga post by the popular girls in which they called you ‘Sa-MAN-tha’ and compared your eyebrows to our history teacher Mr. Blumenthal’s shitty mustache and drew a fake wiener on you in Microsoft Paint? I couldn’t, and I shouldn’t have to.

The rest of the night was awkward, all of us late-bloomer ladies knowing that Kaitlyn was probably holding hands with a boy at the skating rink while we were all practicing making out with our closed fists. I could tell she felt sheepish, maybe even confused, as to why I was giving her curt responses to her questions and rolling my eyes at everything she said. The rest of my group of friends were doing their best to maintain composure, carrying on like normal and even continuing to laugh and drink with Kaitlyn, as if she hadn’t pulled the rug out from under our friendship with her deception. They are stronger than me. I simply could not stand for it.

To any woman out there who was average looking or above in middle school: heed my warning. Don’t spring this on your friends. Be honest and upfront about your past. You owe it to your squad to let them know that you are operating from a different headspace, the headspace of someone for who never truly suffered.