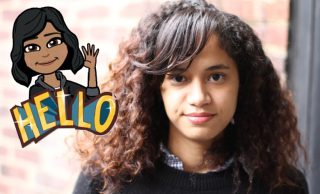 I love texting. I could never get enough of all the fun iMessage add-ons. Emojis, stickers, GIFS – I embraced them all. I especially used to love sending flirty Bitmojis to my boyfriend – you know, the customizable avatar that’s always a slightly better-looking version of yourself – that is, until everything backfired.

That’s right, my boyfriend left me for my Bitmoji.

It started innocently enough. I downloaded the Bitmoji app and made myself a custom Bitmoji. I gave her my wavy hair, my cool glasses and funky signature sense of style. I admit I also made her a little thinner than me – I mean, why not, right?! And, of course, like all Bitmojis she had gigantic eyes. Apparently my boyfriend loved huge eyes on a woman.

The first time I showed him my Bitmoji, he kept saying, “Oh my god she’s gorgeous.” And I was like, “You mean I’m gorgeous?” And he was like, “Uh huh yeah sure I meant you.” But I could already tell that something wasn’t right.

Before long, he would get angry when I would send him texts that didn’t have a Bitmoji in them. Then he suggested I start “dressing more like her” which was weird because I already kind of did? It was so unsettling.

Then, one night, we were having sex and I noticed that he kept looking over at his phone on his nightstand. I thought he was expecting an important call or something so I stopped and asked if everything was okay. And that’s when I noticed what he was looking at — my Bitmoji. Then he came.

That was the last straw. I told him I was deleting the app and he got really uncomfortable. The next morning, I woke up to an empty bed and a note: He was leaving me for her, my Bitmoji.

They have a place together in the Financial District now. I hear they’re doing well.

After a lot of pain and quiet reflection, I came to terms with that fact that, ultimately, she’s just hotter than me. And easier. She doesn’t talk, aside from the catchy phrases that sometimes float around her. She doesn’t eat. She’s a bubbly cartoon with impossibly huge eyes. She’s the ideal woman and I can’t compete with that. Honestly, I’m happy for them.

I’m not mad. I mostly tell my story to warn other women — don’t let him see how hot and perfect and fun an app can make you look. That app can ruin your relationship.

My Self-Care Is Just Me Sorting Myself Into Ravenclaw Over and Over Again I Moved to L’Oreal’s Lash Paradise And Honestly, It’s Fucking Amazing