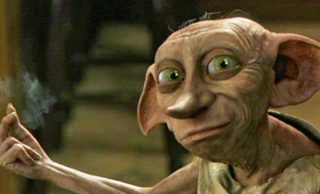 People always think that just because I’m a witch, Hogwarts must have been a breeze. Trust me, it wasn’t that easy. Seasonal affective disorder left me feeling isolated and anxiety about my future led me to a regretable night where I hooked up with Harry Potter’s house-elf. Yes, I admit it: I fucked Dobby and the sex was pretty good.

My first misstep happened when I asked them to sort me into Gryffindor when I knew damn well I’m a Ravenclaw. Seven years later, I was failing Divination, I hadn’t had a real boyfriend and my best friend had just transferred to Durmstrang. That’s why I ran into Dobby at the Gryffindor House Cup party and ended up sleeping with him. Again, it wasn’t as bad as you’d think.

I’d spent so much of the winter staring out of my window at owls flying by, that I felt barely capable of starting a conversation with anyone. Dobby is famous by extension because he’s friends with Harry, Ron and Hermione, so I knew who he was when I walked into the party. But when I saw that little elf standing there meekly, he was way less intimidating than I expected, so I downed a Butterbeer then went to talk to him. After a few minutes, I grabbed his huge pointy ear and whispered, “Do you want to get out of here?” He nodded yes, and we snuck into the girl’s dormitory and had sex for a pretty long time actually.

Having sex with someone you don’t know is definitely bizarre, especially when it’s an emaciated not conventionally attractive elfin creature. I took off the loose dirty cloth he was wearing, revealing his almost skeletal body. Once I got past the fact that I was fucking a three-foot tall elf who was probably a hundred years old, I actually had a pretty good time. Harry had always spoken about Dobby’s work ethic and boy was he unafraid to go down on me for hours that night.

I recently found out that Dobby died. It made me sad, because I had a genuinely good night with him so many years ago. Sure, when I woke up to his giant eyes and his quivering smile, I got nauseous thinking that he was falling in love with me and even worse that people might learn that I’d gotten it on with a gnarly little house elf. But after learning about his sacrifice to protect Harry Potter, I felt sad that I wasn’t able to make that tiny dick happy one more time. I guess some part of me hoped I’d see Dobby again someday.

R.I.P. Dobby. I’ll always remember the night we spent together. The sex was good.

*If you’re reading this and recognize my true identity, don’t you dare tell a soul I fucked Dobby.

My Sugar Daddy Just Wants Me to Get Good Grades I LIVED IT: I Had to Poop Right After I Took a Shower