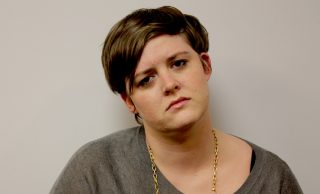 I think it’s time to take a break from discussing the Black Lives Matter movement to address the recent negativity I’ve received while trying to make myself the center of that discussion.

I’ve been accused by several people in this very book club of having “white fragility,” and being “openly and obviously uncomfortable with acknowledging that white people can and do contribute to the cycle of oppression in this country by passively benefitting from it.” Well I don’t, okay!? So stop saying that I have white fragility, because it hurts my feelings!

White fragility? I mean, what are you even trying to say? Are you trying to tell me I’m some kind of hypersensitive, tone-deaf drama queen whose life is so privileged that the worst thing I ever have to deal with is being called out for perpetuating harmful microaggressions? You know what? Forget it. I really can’t talk about this right now because I’m getting too upset.

But while we’re on the subject, I will say this: I am absolutely not too “uncomfortable” to have an open discussion about race relations in this country. I have discussions about race with my friends all the time! It’s not my fault they are mostly white! And we all agree that racism is terrible. So stop accusing me of stuff! It’s really bumming me out and totally killing my enthusiasm about this book club.

Maybe if you rephrased your argument for why I exemplify white fragility, people would actually listen to you. Try coming at it from the angle of educating me and maybe I’ll be able to listen. Otherwise, I’m just going to shut down, because this shit is hurtful.

But that’s all I’ll say because I seriously can’t deal with this vibe right now. And again, it’s definitely not because I have white fragility. It’s just that I don’t like the way this conversation is making me feel, and so I’d really appreciate it if everyone would just fucking stop. I mean do you guys respect my feelings at all? Being told I’m fragile makes me feel like I’m shattering into a million little pieces.

While I totally recognize that racism is alive and well in our culture, I, personally, have worked really hard for everything that I’ve had. While I totally acknowledge that racism is a structural problem, I definitely operate outside that structure because I am a good person. So stop projecting, okay!? It’s like you don’t understand how your actions make other people feel.

Look, I just remembered I have somewhere I need to be right now so I’m going to have to exit this conversation. But let’s definitely pick this up as soon as I deem it appropriate.

Our Friend Group Decided to Drop Stephanie For No Reason. Here’s Why. Should I Have Kids or Just Poop All Over My House Myself?