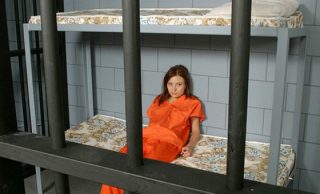 I’ve always considered myself a pretty normal girl. I was on the cheerleading team in high school, I love getting dressed up, and I’ve been known to sing along to Taylor Swift in the car. That’s why, until I started watching the television series Orange is the New Black, it never even occurred to me that I might be in prison.

I know what you’re thinking: How could I not know? And it’s true that now, it seems like the signs were all there — I committed a crime, was sentenced to several years of incarceration, and was forcibly relocated upstate. But the thing is, in our society, we’re told that there’s a certain way your life is supposed to go. You’ll go to prom, fall in love, and not go to prison. It can be hard to come to terms with the fact that your life just isn’t going to follow that trajectory. For me, it was impossible. That is, until I saw the characters of the acclaimed television show, Orange is the New Black. Here were strong, unapologetic, accurate representations of women living their lives behind bars. I thought, “That’s me. I’m behind bars.”

I remember when I watched the first episode, I immediately felt as though something inside of me had been unleashed. As I watched Nicky kiss Morello in the prison, I thought, What if I’m in prison? Still, it seemed crazy. After all, wouldn’t I know by now? I’m from a liberal city with tons of prisons. But as I watched episode after episode, my sense of belonging to this community only grew.

I didn’t tell anyone about my questioning or my discovery. At least, not yet — I didn’t want to make a big deal out of it in case my being in prison was just a phase (so far, there are no signs of that). Here’s the thing: society is always trying to put labels on us, like “in prison,” or “not in prison” — and those labels can start to feel pretty suffocating. The more time went by, the more I felt like a liar every time I casually mentioned not being in prison.

It pained me to hear people casually mention other people who had prison-related identity crises well into their adulthood. “Can you believe that?” they’d say. “I mean, how do you not know you’re in prison?” That stung. Other people would talk about women’s prisons as “a little more fluid” and “more on a spectrum” than men’s prisons. But if I’m being honest with myself, that just doesn’t cover where I’m at anymore.

So, I’ve decided it’s time to tell the world the truth about who I am. I want to make all of those brave, true-to-life characters proud, and prove to myself that I’m not afraid.

And so, world: Yes, it’s true. I am in an orange jumpsuit and I am in prison.

Maybe some of you are surprised, or upset about how I came to this conclusion, and that’s okay. But I hope that you’ll be able to realize that this is who I am, for better or for worse. I love you all.