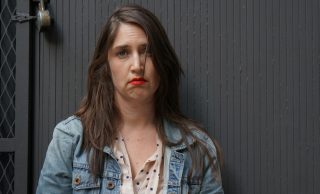 Growing up in a small, conservative community, I didn’t even hear about laughing until high school. Honestly, I had figured it was likely just an urban myth. But by the time I left for college, I had watched a couple funny movies (Airplane, The Santa Clause 3: The Escape Clause) and saw people doing this thing, so I started doing it, too, even though I didn’t know what was so funny about any of them.

Once I discovered my peers were cracking up on a regular basis, I began to wonder what was wrong with me. Friends introduced me to all sorts of humor – slapstick, satire, those videos where cats jump into boxes…I didn’t want them to feel self-conscious or inadequate so I gave the most convincing fake laughs I could.

Sometimes they were skeptical. “Are you sure you laughed?” They’d ask. “Definitely,” I would say. “It was just one of those really hard laughs were no sound comes out.” Or, “I laughed right when you were laughing so you couldn’t tell.”

This went on for years. When my husband learned of my secret, he understandably felt betrayed. “What about all those Scrubs episodes we watched?” “What about on our honeymoon when I fell getting out of the Jacuzzi?” They were all fake, I confessed. “No, no,” he insisted, not wanting to believe it. “There was that time on your birthday, remember? That had to have been real. I even saw you spit out your drink!”

I know my husband would probably like it if I threw my head back and cackled like I was in some sort of Julia Roberts movie, but that just isn’t me. Though it’s hard for him to believe, just seeing him laugh is enough for me. But I shouldn’t have to explain myself. I have a very fun and fulfilling life no matter what anyone says, and several friends have admitted to me in confidence that laughing really isn’t all it’s cracked up to be.

In spite of all this, I’m still open to the experience of laughing. While I don’t think it’s necessary for having a good time, I concede it’s possible that up until now I just haven’t encountered the right joke. In the past, people have tried to tell me that I’ve never laughed because I’m too nervous or too uptight. They just throw their lazy, one-size-fits-all comedy at me and expect fireworks. Sorry guys, not every girl’s funny bone is in the exact same place!

In conclusion, just because someone has never had a real laugh, don’t assume there’s a problem. Although movies and TV would have you believe that everyone’s busting a gut every other day, this is probably another Hollywood myth. So if, like me, you’ve never experienced a true titter or a genuine guffaw, take heart: There are likely more of us out there, and a little smile isn’t so bad, either.

I Support All Women, Especially The One In This Horse Costume With Me My Kidnapper Won’t Admit He’s Lost And It’s Sooooooo Annoying