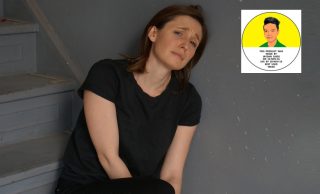 Life isn’t easy when your daughter gets murdered and you arrive just in time to catch a glimpse of her killer fleeing the scene but the police never find him and after a couple of years it becomes a cold case. That’s a given. But I thought at least after such unconscionably tragic events, the worst of my trials were over.

That’s what I thought – until I entered my local LUSH store two years later.

Just the other day, I was perusing my local LUSH cosmetics retailer, taking in the sensory feast of bath bombs, body scrubs, and lotions, when it happened: There on the back of a Mask of Magnaminty tub was a little sticker. “Made by Lance on 1/6/2022” with a little drawing of a man whose maniacal eyes were all too familiar.

Yes, it was him. My daughter’s killer.

I rushed to the nearest sales associate in hopes of finding answers. “WHO IS HE?” I cried. “THE MAN ON THE SOAP. WHERE CAN I FIND HIM??”

She seemed taken aback and frightened, as well should someone be in such unwitting proximity to a cold-blooded murderer. However, she insisted she “just started there last week”, didn’t “know who Lance is”, and “would I like to speak with a manager?”

Speak with a manager? It was a little late for that. If this floor worker was already helping the killer cover his tracks, then who could say how far up it went?

I was just beginning to get my life back on track, doing things that bring me joy, like drawing my own Garfield cartoons, when I got sucked back into the fiery pits of grief and injustice. Can you imagine? Coming face to face with the man who robbed your gorgeous, innocent daughter of her life, and he’s on the back of a product called Mask of Magnaminty which is a play on “magnanimity” because it has mint in it, but really I’m not even sure what magnanimity means?!

The whole thing could not have been more destabilizing.

I couldn’t get much more information on Lance as every employee at LUSH adamantly claimed he was “just a factory worker who made the face scrub” and “almost definitely not a murderer.”

The police were no more help than they had been the first time. They simply couldn’t grasp LUSH’s “handmade by” stickers, and explaining the whole enterprise to them was more trouble than it was worth.

But to Lance: if you’re reading this, know that I know who you are, I will find you, I will make you make me an Angels on Bare Skin face and body wash, and I will seek revenge that meets the cost of my daughter’s life.

Also, they didn’t offer me any samples!

I LIVED IT: I Saw a ‘Don’t Give Up’ Sign While Running and Now I’m in the Hospital Help! I Didn’t Label My Frozen Eggs and Now My Roommate’s Having My Baby