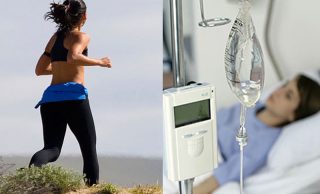 I recently took up running as a way to stay healthy and adopt a more positive attitude, but that all changed when I was on my daily run and saw a yard sign that said “Don’t Give Up!” I took it literally, as one is supposed to do, and now I’m in the hospital after running for hours and passing out because I hit my head on the concrete.

Thanks a lot, toxic positivity!

If I never saw the sign, I could have just kept running at my own pace for however long I wanted to, but because of some idiot who wanted to spread love or whatever, I’m now sitting in a hospital bed in the ICU.

I’d just like to take this moment and say that if anyone feels like they need to put some dumb positive message somewhere in a heavily trafficked area, maybe think again.

I thought I was bettering myself by choosing to not give up, but is being severely concussed a better version of me? Yeah, didn’t fucking think so.

I’m sure that I’m not the only one who’s suffered at the hands of these dangerous affirmations either. Just last week, I saw a sticker on a telephone pole that said “You’re in the right place at the right time.” Okay, but what if I was crossing the street while a car was speeding towards me? It’s not really sending the right message then, is it?

After my vitals stabilized, I tried explaining all of this to the medical practitioners who were taking care of me, but they didn’t seem to understand my train of thought.

“I still don’t get why you ran for four and a half hours when you usually only run for thirty minutes,” my doctor told me, still not grasping the situation.

Well I’m sorry for trying to be receptive to other people’s encouragement! I‘ll definitely stop doing that in the future after suffering through this awful experience.

As soon as I get out of this hospital, I’m gonna make a sign that says “Stop making signs!” Yeah, that’s right – you can’t get rid of me that easily!

Why I’m Refusing to Renew My Driver’s License Until the DMV Allows Baby Face Filter I LIVED IT: I Saw My Daughter’s Killer on a LUSH Sticker