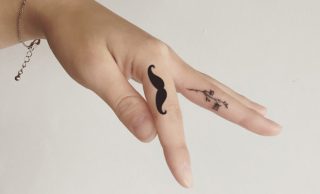 “When you put your finger to your lip, it makes it look like you have a mustache!” my friends said. “This’ll be funny forever!”

How naïve we were…

The first six months of having my mustache finger tattoo were bliss. Everywhere I went, people noticed me. I was cool, I was hip, and when I went to shake someone’s hand, they’d go, “Oh, didn’t realize you were growing a mustache,” and we’d laugh and laugh and laugh. “Tik Tok” by Ke$ha was top of the charts. None of us were ever sad.

But by 2019, it was clear my friend was correct. I found myself featured on Instagram pages dedicated to spotting “noobs” in the wild. I lost my job because my boss assumed I couldn’t be trusted to have foresight. I tried desperately to get the tattoo removed, but it went too deep. It was a part of me now.

Do I regret my choice, like deeply deeply regret it to the point where I would kill my old self in order to have not gotten this tattoo, even if it meant my current self would also die? Yes. Did I have a second question? No.

For any of you contemplating getting a topical tattoo, please, heed my tale. Stick with the classics: maybe trees, a partner’s name, some characters in a language you do not speak. You’ll never regret those.

Whatever Hater, YOLO! My Therapist Thinks I Dismiss Criticism with Dated Slang I LIVED IT: I Made Too Much Soup