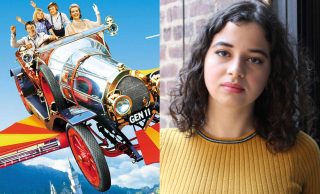 Road head is not for the faint of heart. You have to deal with bumps, unexpected starts and stops, leaning over that weird center console. But that’s all a walk in the park compared to giving road head in the renowned flying Chitty Chitty Bang Bang Car: a challenge I naively thought myself up for until we took a hard turn and I came crashing down a height of four stories from the clear blue skies.

They don’t warn you about this in driver’s ed OR sex ed!

This ill-fated journey all began when I met a zany inventor with two freaky little blonde kids. He was pretty cute in that pre modern orthodontia, pre skincare widower way, but I was definitely most attracted to this little hottie’s souped up ride. Basically he had taken and old-ass car and given it floaties and wings so that it could so that it could travel through the big three: land, water, and sky.

The one thing this man didn’t think to invent was seatbelts.

Things were heating up between us, and he suggested we hop in his whip. Maybe if I had tried to give him road head while we floated around the nearby pond, I wouldn’t be in a full body cast right now, but much like Icarus, I don’t know how to swim. That’s how I ended up cruising at an altitude of four stories with a dick in my mouth and my life in God’s hands. But the Lord was not on duty that day.

We may never know for sure if the car suddenly jolted 45 degrees because I screamed, “Megaladon ghost!” (turns out it was just a cloud), or if it was because my sloppy top was just that good. Whatever the case, I went flying out of that thing like a bat out of hell. It was my distinct good fortune that I hit 15 tree branches on my way down, bouncing around like a Rube Goldberg, breaking my fall as well as most of the bones in my body, or else I legit could have died.

So if you’re thinking of giving extreme road head, remember my story. I’m not one to preach abstinence only, but be smart, stay vigilant, and use protection (a parachute). Now I have to wrap up because I’m sending my seven-year-old niece to get me some ice chips so she has to stop transcribing this.

Be safe out there!