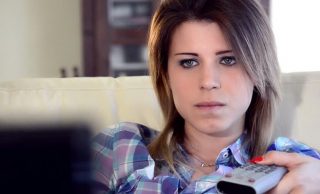 I used to watch coming-of-age films and root for the scrappy teen protagonists while they learn to become independent and push back against all the authority figures in their life, but last night when I watched a recent teen flick, I actually sided with the parents instead of the person who was coming of age.

There is just no way I can’t see the parent’s decision as fairly reasonable. Who have I become, and how the hell did I let this happen to me?

In one scene of the movie, the teenage daughter screamed at her parents for not letting her go to a party that was on the other side of town and that she also got invited to by a coke dealer, and I couldn’t help but agree with her parents when they told her, “Absolutely not. Are you crazy?”

Years back, in another life, I would’ve been just as angry as the protagonist for having her freedoms violated. Now, I can’t help but wonder what the fuck is wrong with her, and by extension, teenage me as well. Like, your parents have been alive so much longer than you? Consider they know something you don’t. Fuck, I’m doing it again.

Obviously, as you age, you have different opinions about the media you’re watching, but never in a million years did I think I’d be on the parents’ side in a coming of age movie. I mean, the daughter’s gonna get herself into such a dangerous situation! Someone has to do something, right?

During another part of the film, the teen protag also gets a nose piercing that was done by one of her friends, and when she comes home her parents see her now-infected piercing, and they couldn’t be more displeased, which I also found disturbingly valid.

Have I seriously gotten this old and uncool so fast? What the actual fuck?

While I understood exactly how she felt when I was 17 years old, right now I couldn’t be further than that state of mind, which is why I now feel shaken to my core and also a million years old. I’m only in my 20s but I feel like I may as well adopt a teen to protectively scold.

I strongly believe that there should be a new warning for coming of age films that cautions people over the age of 21 against watching them, because I really wouldn’t wish this on my worst enemy. If you’ve already come of age, then please be warned: You will not get what the main character’s going through. Take it from me and just focus on your taxes or something instead!

I LIVED IT: I Tried Spitting in My Partner’s Mouth but Nothing Came Out Because I’m on SSRIs Why Being Called on My Bullshit Is a Violation of My Boundaries