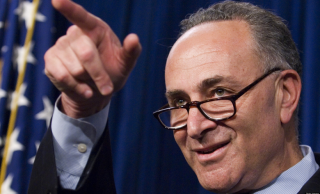 Like, many people, I’ve been contacting one of my senators to voice my concerns about recent appointments to the presidential cabinet. I’ve made so many calls that the phone number for my senator appears multiple times in my recent call history. Given my history, I probably should have known that I was going to get way too drunk with my friends and drunk-dial Chuck Schumer eventually.

But then, I couldn’t stop.

My first voicemail happened around 10pm; it was an impassioned speech about the Dakota Access Pipeline, and how someone has to do something about the violence the protestors there are facing. While it was slurred and I cursed a lot, I do think I managed to get some good points in there.

But things got a lot worse around the second voice message. I was thinking about my ex-boyfriend (as I often do around the four-drink mark), whose name also happens to be Chuck. So I drunk dialed the future senate minority leader, in tears, yelling about how Chuck broke my heart two months ago by cheating on me with his personal trainer. I mean, can you believe that? I screamed that I didn’t trust men into the phone, and that message was left for a man who represents my state in the senate. I can do a lot to participate in our democratic society, but I really can’t undo that one, which kind of sucks.

Around 3am, my friends took my phone away but I really wanted pizza and so did all of my friends so they gave it back to me. Again, I called senator Chuck Schumer and begged for some Dominos, and asked if he could maybe pay for it because I’m tight on cash right now. Unsurprisingly, he never called back and we never got a pizza from our senator, which is kind of bullshit but also pretty understandable given the context. I screamed at my friends to take my phone away, but they were like “No, keep going! Speak truth to power!” because they were also kind of drunk and thought I was on the phone with Domino’s.

Twenty minutes later I was throwing up over the toilet, and in between some violent bouts of puking, I whispered to his now-full voicemail box: “Please help us Obi Wan Kenobi, you’re our only hope,” before I passed out next to the toilet.

Obviously this wasn’t my brightest night, and I’m humiliated by my lack of control in calling my state senator. Now I’m limiting myself to one bottle of wine on girl’s night now, and plan to call Chuck Schumer’s office again with an apology.

I Can’t Be a Jerk, I Was a Geek in High School Here Are Some Important Organizations That Need Your Help, and My Film’s Kickstarter