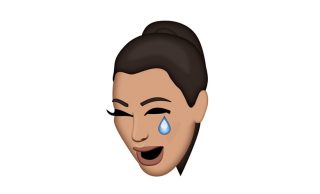 Ever since Kim Kardashian-West announced that she would be making her face, body parts, and favorite things into an emoji keyboard, I think that part of me knew that in some dark moment of betrayal, I would lose my man. I just didn’t know it would be like this.

To be specific, it was the emoji of a cartoon ponytailed Kim upside down on a stripper pole. You know that one? From arm’s length, it looks more like a beige pelican atop a piece of marsh grass. And he was jerking off to it. Most embarrassingly, he had his iPhone keyboard open and was just relentlessly typing the emoji over and over in the Notes app while he did the job. He was apologizing profusely, but I could barely hear him over the sounds of my disgust.

We’ve decided to go to counseling together; him for his self-diagnosed sex addiction, and me for my self-diagnosis of his sex addiction. I genuinely hope this is something we can move past together. All I know is, I never want to see another Kimoji again. Unless it’s the waist-cincher one, or the solo cup, because my friends and I love to send those to each other. You can’t get through something like this without friends.

I Finally Feel Secure About My Relationship Today Will Anyone Love Me Once They Find Out I’m a TOTAL Caffeine Addict?