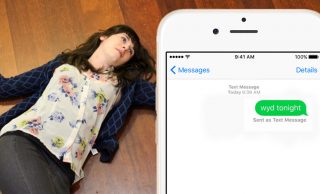 For a long time, I’d been flirting with a guy named Josh who played the same game over and over again: He’d pretend not to see me at a party, then text me “Wyd” as soon as I left, just to check if I had any interest in fucking him now that I’d already gone home. It was sort of sweet, him pulling me back and forth without any regard for my sanity or sense of wellbeing. So imagine my surprise when instead of ignoring me for an entire party, he ignored me for the duration of my entire life. Then, just to remind me he was there, he texts me, “Wyd” while I’m on my deathbed. Ugh, men!

Before he sent me the last text I’d ever receive, I was convinced Josh wasn’t into me at all. He’d managed to play the ultimate mindgame—paying tons of attention to me whenever it suited him, then suddenly ignoring me throughout the rest of my 20s, 30s and 40s, and decades beyond until I neared the end of my life.

“He’ll never text me back,” I thought, as I climbed to the top of my field in entertainment law, married my best friend, started a family with him and finally became old enough to enjoy things like coffee flavored ice cream and 50 years later, was diagnosed with a rare and fatal disease and inched closer toward death.

In fact, I’d totally forgotten about Josh as I readied myself to pass into the afterlife. There I was—lying on my deathbed, surrounded by all my loved ones, when I finally got the text I hadn’t been waiting for: “Wyd”.

What am I doing? “Not much just dying,” I found myself responding embarrassingly quickly.

It was crazy but wow, was Josh’s text effective! The second he gave me one last meaningless attempt at attention, I almost totally forgot the past 70 years he ignored me. My life might’ve been just about over, but he was finally making one last lazy effort to see if that puss was open for business, and that meant a lot to me.

No matter how much time has passed, it’s nice to know someone still sees you as one of several sexual options.

Though I didn’t have a lot of time left to live, I revived my flirtation with Josh. “Ready to meet some angels,” I said, to which he replied, “Ha ha, nice.” And that’s honestly all I needed to hear. Because it doesn’t matter how long he pretended not to see me, what truly matters is the half-assed attempt at a booty call he made at the very last minute.

Help! My SoulCycle Bike Came Loose And Now I’m In Chile My Best Friend Got Her Life Together Without Consulting Me First